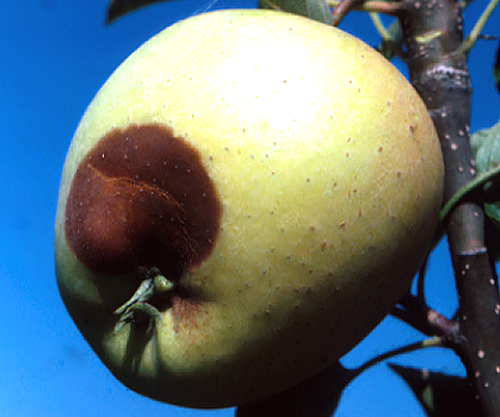 Fruit infections that occur early in the season appear at the calyx end and typically develop into blossom end rot that may not appear until the fruit begin to mature (A). Seed cavity infections are associated with infections of the carpel, particularly in varieties with Delicious parentage, often leading to premature fruit drop within 1 month after petal fall. Late fruit infections occur through cracks in the cuticle, wounds and possibly lenticels. On mature fruit, lesions enlarge rapidly (slower in the northeast), typically producing a series of concentric bands that alternate in color from brown to black (B). The flesh beneath the rot remains firm and leathery. Infected fruit color early and ripen in advance of healthy fruit, up to 3–6 weeks earlier in the southeast. Small black fungal bodies form on rotted fruit surfaces. Eventually, infected fruit dry down to mummies that remain attached to the tree, serving as inoculum sources in the spring. Frogeye leaf spot: Lesions start as small purple specks on the upper surface of leaves 1–3 weeks after petal fall and enlarge to 3–6 mm in diameter. Mature lesions are circular, tan to brown with distinct purple margins (C). Heavily infected leaves become chlorotic and drop. Cankers appear primarily in trees where the older wood has been extensively invaded by basidiomycete wood-rotting fungi (D, E), the presence of which is denoted by darkened wood visible in the center of a cross-section of an infected limb (F). Healthy apple limbs show no darkened wood in cross-section.