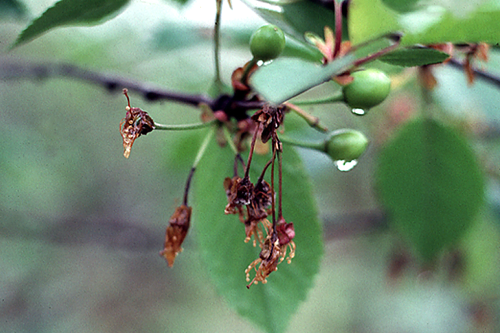 Infected flowers turn brown, wither, and either become fixed to twigs as a gummy mass or drop like unpollinated flowers (A). Apricot is the most susceptible to blossom blight, followed by prune, sweet cherry, peach, sour cherry, and then plum. If infected blossoms do not drop off, the fungus may grow through the flower stem and into the twig below. Twigs develop elliptical to fusoid cankers with profuse gumming at the margin between diseased and healthy tissue (B). Leaves on infected shoots turn brown and wither, but remain attached. In some instances, twigs are girdled and killed. On the fruit, infection first appears as soft brown spots. These rapidly expand and become covered with powdery masses of tan spores (C). Infections spread rapidly from fruit to fruit when they are touching one another. Rotted fruits typically shrink into a wrinkled "mummy" as they dry on the tree (D). Both immature and mature fruit infected with brown rot tend to remain on the tree and form mummies (E). Mummies that fall to the ground may produce a spore-bearing mushroom-like structure called an apothecia the following spring (F); its importance in the disease cycle is minimal in the Northeast and mid-Atlantic region.