Distribution: Primarily limited to eastern North America where Juniperus species occur. Cedar apple rust is the most common rust on apple; it does not affect pear. 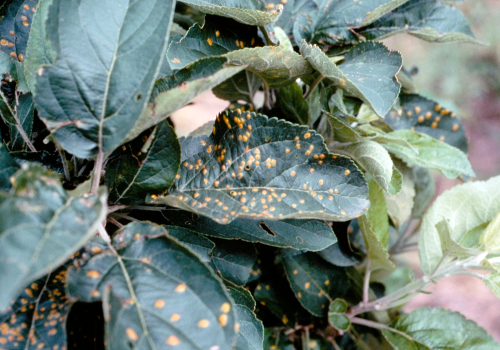 On leaves, the disease appears on the upper surface as small, faint, yellow spots (A) shortly after the appearance of active cedar galls (B) found on the alternate host for this fungus, the red cedar (Juniperus virginiana L.). Lesions eventually turn dark yellow to yellow-orange and develop a reddish border (C). Tiny pustules form in the center of these lesions, eventually turning black. Blisters form on the underside of lesions by midsummer and produce small, tubular projections (D). As lesions age, they split and the walls curve back, forming a cup with masses of powdery orange to brown spores. On the fruit, lesions usually appear on the calyx end, similar to those on leaves, but only a bit larger, and are usually slightly raised. A dark-green border forms around the yellow to orange colored lesion as they age (E, F).