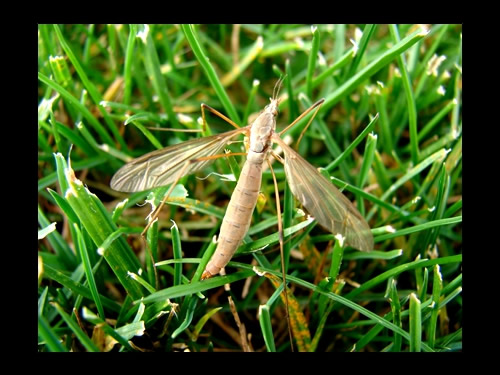 Cranefly in grass A

The insect generally has a single generation per year. The adults, which resemble giant mosquitos, begin to fly in August (Image A). The two species are difficult to distinguish from each other, and can also be confused with several species of native craneflies that do not harm turfgrass. The most destructive of the two European species (European cranefly and common cranefly) is the European cranefly. The European cranefly deposits eggs in the soil in August or September. Young leatherjackets begin feeding on turf roots in September. They overwinter in the soil and resume feeding in April and May. Larger larvae come to the surface at night and feed on grass blades and crowns, sometimes causing a scalping effect in small patches (Images B & C). Larvae complete development in early June, moving about 3 inches deep into the soil to pupate. European cranefly adults do not emerge until August, but common cranefly may have two generations per year with adults emerging in the spring and the fall.

Notes: This pest was first reported in Michigan about 2005. In 2012, there were a number of locations in the metropolitan Detroit area and Grand Rapids that were damaged, in some cases, severely. It is expected to slowly spread across the entire state.