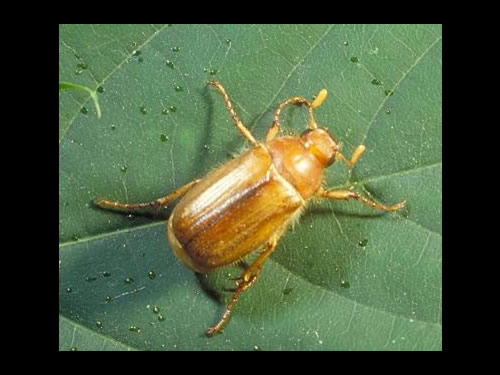 European Chafer on leaf A

In an average year in southern Michigan, adult flight begins in mid to late June and continues for 2 to 3 weeks.  European chafer is a nondescript light brown beetle, 0.5 inch long (smaller than June beetles and larger than Japanese beetles) and robust (Images A & B).  They do not feed as adults. Beetles emerge at dusk each evening and tend to congregate in trees for several hours (Image C). Homeowners may not even see the beetles because of his nocturnal behavior.  Eggs are laid from late June through July.  Larvae hatch from eggs in 10 days and begin to feed on the roots of turf. They feed through late summer and fall, not stopping until the ground freezes.  They resume feeding in the spring before the grass begins to grow. The larvae pupate (and stop feeding) in late May.

Notes: A healthy, well-maintained turf can support up to 5 grubs per square foot without the grub damage becoming obvious. Since the adults fly mostly after dark, the first indication that European chafer has moved into an area may be dead patches of turf and skunk damage.