Distribution: Occurs throughout the US and Canada but is most problematic in warmer production regions, such as the mid-Atlantic states. 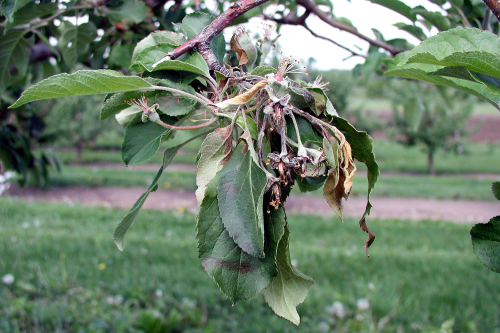 Blossom blight occurs in the spring. Infected blossoms first exhibit a water soaking, followed by wilting and their eventually turning brown on apple and nearly black on pear (A). Individual flowers or the entire cluster may be affected. Typically, infected blossoms do not fall and bacteria progress into the tender shoot growth. In the shoot, the bacteria travel along the midvein of the leaves and they soon wilt, shrivel, and turn brownish black, killing the entire shoot. Bacterial ooze may be observed under warm and humid conditions (B). Flowers will cling to the infected stem and often remain attached throughout the season. Infected fruit appear black and shriveled and usually remain attached to the tree. Shoot blight develops in late spring or early summer on actively growing terminal shoots, including suckers and water sprouts. Infected shoots first have an oily appearance and turn a dark green. On apple, the infected shoot becomes light to dark brown, in contrast to pear, in which the shoot becomes black. Blighted shoots often form a characteristic "shepherd's crook" at their tip and the dead leaves remain clinging to the affected twigs (C). The disease can progress to whole limbs and, when infection is severe, the whole tree appears to be scorched by fire, hence the name fire blight. Rootstock blight is the result of infections that travel from infected blossoms or shoots into the rootstock, although direct infection of the rootstock through sucker growth is possible. Infected rootstocks are discolored and there is usually a sharp demarcation between infected rootstock tissue and scion tissue when the bark is peeled back (D). Under favorable conditions, the bacteria may ooze from the rootstock, leaving streaks down the rootstock.