May or June Beetle 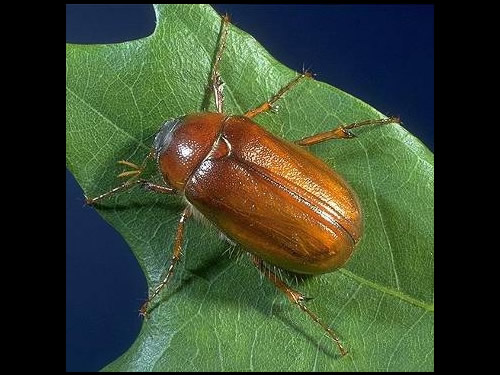 June beetle on leaf A

The adults are usually dark brown but can be black, tan or a dark chestnut color (Images A, B, and C). They vary in length from 0.5 to 1.0 inch long, and tend to be rounded and robust. The term May or June beetles refers to some 10 different species of beetles in the genus Phyllophaga, that are known to injure turfgrass. Adults are most active just before and after sunset in May or June, and they are attracted to lights. Eggs are laid, and hatch in June to early July. The larvae feed on grass, broadleaf weed, tree and shrub roots, and mature in the soil.  Unlike the other white grub pests which only have one generation per year, May or June beetle grubs require 2 or 3 years in the soil to fully develop.

Notes: Depending on where you live in the country, the adults are called May beetles, June beetles or June bugs. They are native to North America and are typically found in low numbers anytime you dig in turf or in a landscape planting.  It is unusual to see turf damage from June beetle grubs.  Dead patches in lawns are much more likely to be caused by European chafer or Japanese beetle. When fully grown, June beetle grubs are much larger than Japanese beetle or European chafer. This makes them even more attractive to skunks to and raccoons. Fortunately, it is rare for lawns to harbor enough June beetle grubs to attract skunks.