Distribution: This disease occurs primarily in the southeastern United States and California. It has not yet been found in the Great Lakes region. 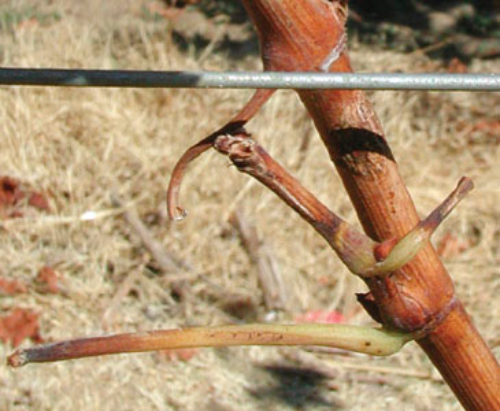 Initially, only a few shoots start to show symptoms in mid- to late summer. Leaves show scorching from the margin inwards and drop off, leaving the petiole attached to the shoot. Flower clusters may set berries, but these tend to dry up. In fall, infected shoots mature in a patchy manner, leaving “islands” of green tissue surrounded by dark brown mature wood. In spring, bud break on infected vines may be delayed as much as 2 weeks, and new shoots are stunted. An infected vine may die the first year after infection or may live for 5 or more years, depending on the cultivar, the vine’s age and climatic conditions. Pierce’s disease is caused by a bacterium that lives in the xylem and is vectored by sharpshooter leafhoppers and spittlebugs. The bacterium is present in native plants such as grasses, sedges, bushes and trees. The range of insect vectors determines the range of the disease.