Distribution: Widespread in most fruit-growing states and provinces in eastern North America. 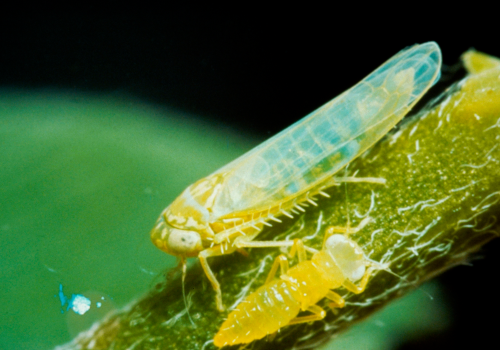 All leafhopper species feed on the undersides of leaves, puncturing cells and sucking out the contents. In general, juice grape (labrusca) varieties are much more tolerant of leafhoppers than hybrid or vinifera varieties.

The adult potato leafhopper is pale to bright green and about 1/8 inch long. Adults are very active, jumping, flying or running when disturbed. The immature forms, or nymphs, are pale green and wingless. They run forward, backward or sideways when disturbed. The potato leafhopper does not overwinter north of the Gulf states. Adults migrate north each spring on southerly winds and are deposited during May and June in spring rains.