Powdery mildew of apple and pear

Powdery mildew of apple and pear 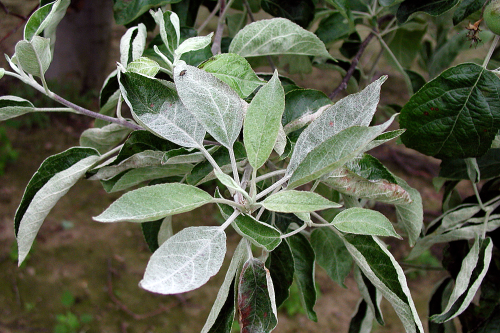 The mycelium appears as white, felt-like patches or as a solid mat on leaf surfaces. William Turechek, USDA-ARS
A

The fungus overwinters in leaf buds and sometimes flower buds. Mycelium develops rapidly on unfolding leaves and appears as white, felt-like patches or as a solid mat on the upper or undersurface of the leaf (A). Infections on the underside of the leaf may cause chlorotic patches or spots to occur on the upper side of the leaf. Infected leaves tend to crinkle, curl, or roll upwards along the edges, giving them a narrow appearance. The blossoms, petals, sepals, receptacles, and peduncles may become infected and covered with the fungus. Blossom infections are less common but are important because infected blossoms will either fail to set fruit (B) or produce small, stunted or russetted fruit (C).