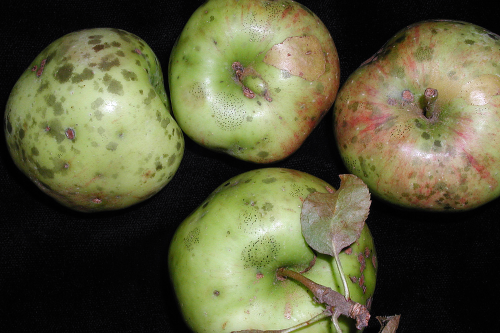 Sooty blotch and flyspeck appear together and affect only the fruit epidermal layer. William Turechek, USDA-ARS
A

Sooty blotch and flyspeck are found together on the same fruit and affect only the epidermal layer of the fruit (A). Sooty blotch appears as various shades of olive-green on the surface of the fruit. Colonies range in shape from nearly circular colonies with distinct margins to large, amorphous colonies with diffuse margins (B). The variation in colony appearance can be attributed to the interaction among the different fungi causing the disease and environmental conditions, specifically temperature and relative humidity.