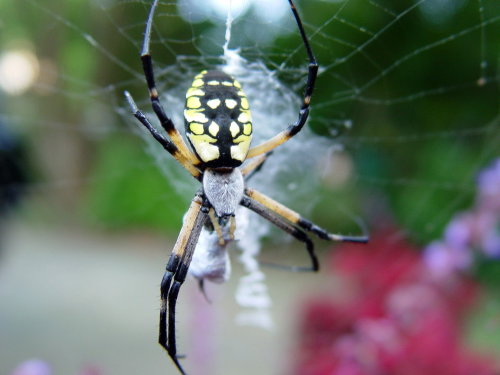 Orb-weavers: Large spiders, including common garden spiders, which are often bright black and yellow or black and red. Linda Rayor, Cornell Univ.
A

The body of a spider is divided into two regions, the cephalothorax and abdomen. The cephalothorax bears the eyes (various numbers and arrangements), mouthparts, pedipalps and legs (four pairs), and the unsegmented abdomen bears the genital structures, spiracles, anus and spinnerets (silk-spinning structures). Orb-weavers are usually large in size. Among them are the common garden spiders, which are often brightly colored, black and yellow or black and red (A). Cobweb spiders (B) often have a small cephalothorax and a large, rounded abdomen, with the legs bent. They are usually found hanging upside down in irregularly spun webs. Meshweb weavers (C) are small (mostly less than 1 cm) and stout. They often spin small webs in the concavity of the top surface of leaves. The sheet web spiders are also small and not often seen, although their webs are conspicuous, particularly when covered with dew. They are flat and sheetlike, sometimes bowl or dome-shaped, and usually with an irregular mesh of silk around or above the sheet. The spider is often found on the under side of the web. Note: Broad-spectrum insecticide applications in the summer are harmful to the establishment of spider populations.