Distribution: SWD is established or has been found in most fruit-growing states and provinces in eastern North America from QC and ON south to NC and west to WI, IL and KY. 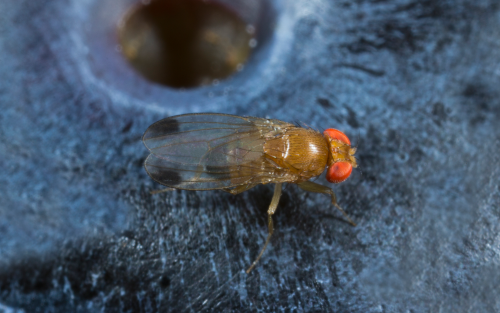 Spotted wing Drosophila can be distinguished from other vinegar flies by spots on the wings of male flies, and by the ovipositor on female flies. First detected in the eastern United States in 2009-10, this small vinegar fly can lay eggs into grapes once the berries become soft after veraison. Unlike most vinegar flies, it can lay eggs into intact fruit, creating a risk of the white larvae (1-2 mm) being in berries at harvest time. With short generation time and high reproductive potential, populations can increase quickly, especially late in the season. Monitor for this fly using a vinegar-baited trap placed in the fruit zone and in the shade, checked weekly.