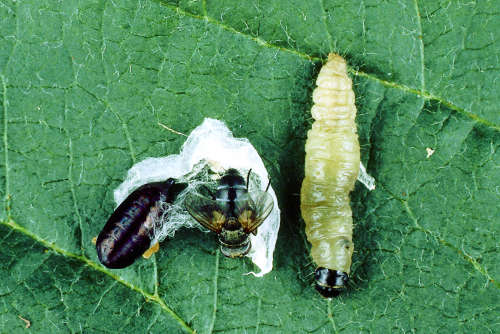 Adult (center) is similar to a housefly, but covered with stiff hairs. Females lay their eggs on the back of caterpillars (right). The pupa of A. interrupta (left). Léo-Guy Simard, Ag. & Agri-Food Canada
A

The adults are similar to a housefly but are covered with stiff hairs (A, center). The larvae have the appearance of small maggots and feed inside caterpillars and other hosts. Females lay their eggs on the back of several species of caterpillars, such as the obliquebanded leafroller [Choristoneura rosaceana. and (A, right)], stink bugs and on the cocoons of the forest tent caterpillar (Malacosoma disstria). The pupa of A. interrupta often can be found on the leaf next to the dead obliquebanded leafroller larva (A, left).