Distribution: NS, QC, ON, and south to mid-Atlantic states. 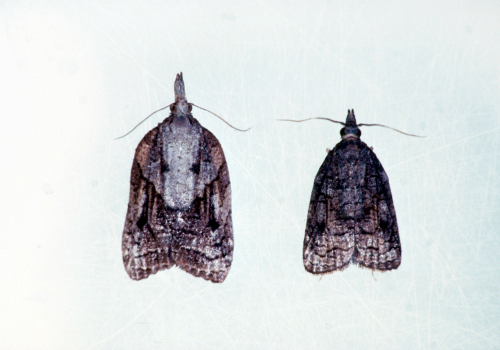 Adult female (left), male (right), varies from mottled gray at the wing base to brown at the wing tip with lighter-colored margins along the wingâ€™s leading edge. Mid-Atlantic Orchard Monitoring Guide
A

Adult is an inconspicuous moth, varying from mottled gray at the wing base to brown at the wing tip, with a lighter colored margin along the wing's leading edge (A). Two or three groups of tufted scales can be seen on the top of the wings. Larva is initially yellowish with a black head, and later forms are light brown to grayish tan with a chestnut brown head, dark thoracic shield and dark stripe down the back of the body (B) (upper: normal larva, below: virus-infected).