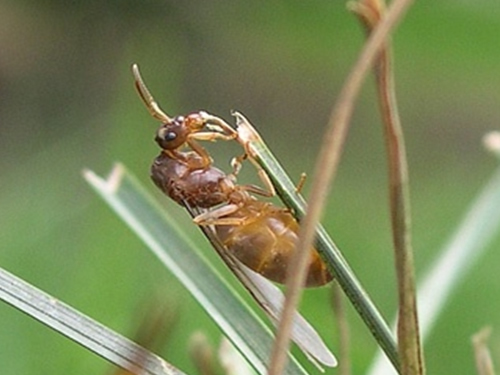 Turfgrass ant on blade of grass A

Ants will undergo numerous generations per year. The species found on golf courses typically have chambers that can reach a depth of 4 or 5 feet below ground. Each of these may have many exits to the surface. The queen lays the eggs and 99% of the offspring are female workers who tend the queen, tunnel, feed the larvae, and forage for food for the colony (Images A, B, and C).

Notes: Ants are also beneficial because the foraging workers may collect the eggs and young larvae of turf pests. Ants are desirable in golf course roughs, home lawns and most turf environments.