In collaboration with Corine Vriesendorp, The Field Museum of Natural History, Chicago. Check out the Field Museum guide to seedlings / virtual herbarium, including seedlings pictures taken by Corine in this project in Costa Rica. 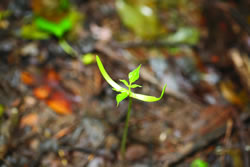 One of the major goals of the science of ecology is to understand the factors that determine the relative abundance and number of plant species in natural communities. Wet tropical forests contain a great diversity of tree species and provide a unique situation to test the factors that influence which tree species compose a forest. Survival and growth through the tree seedling stage is a critical bottleneck. The seedling phase of a plant’s life cycle is especially sensitive to pathogens and to the availability of light, nutrients, and water. Trees can live for much longer than humans and important events occur infrequently (e.g., some tree species produce seed at intervals of >12 years), necessitating longer-term studies. This research is based on a ~13 year record of seedling surveys in five forest stands in Costa Rica, with the goal of developing models of critical aspects of forest regeneration (seedling production, dispersion, growth and survival) in response to light, soil nutrients, pathogens, and rainfall.

A better understanding of the factors that govern the relative abundance of tree species will aid in predicting forest responses to environmental changes, which is critical to timber production, wildlife habitat, and forest carbon storage. Environmental trends in tropical areas include greater variability in climate (warmer temperatures and less rainfall) and increasing deposition of nitrogen, sulfur, and other chemical pollutants from the atmosphere. This research will help resolve how forest regeneration responds to these environmental changes.

Bachelot, B and RK Kobe. 2013. Rare species advantage? Richness of damage types due to natural enemies increases with species abundance in a wet tropical forest. Journal of Ecology 101: 846-856.

While titles of the above publications usually summarize the important findings, a little more detail is provided here: 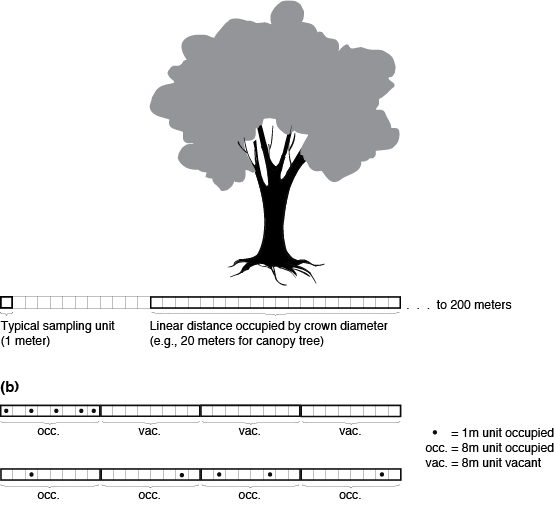 Figure 1. The sampling units in seedling limitation studies are often much smaller than the mature tree that a seedling might someday replace. (a) Transects used for seedling censuses consisted of 200 contiguous 1 m2 quadrats. The typical sampling unit used in studies of recruitment limitation is <=1 m2. However, the spatial scale of mature plants is much larger as illustrated for a 20-m crown diameter canopy tree. This study evaluated seedling prevalence at both 1 m2 and mature plant size spatial scales. (b) The spatial distribution of occupied 1-m2 quadrats will influence the calculation of prevalence at coarser spatial scales. In both transects, 5 of 40 1-m2 quadrats are occupied (prevalence1m = 0.125), but because occupied 1-m2 quadrats are clumped in the upper but broadly distributed in the lower transect, prevalence8m= 0.25 in the upper and 1.0 in the lower transect.

2. Irradiance and mineral nutrients have similar prevalence and magnitudes of effect on seedling height growth in the understory (Holste et al. 2011). 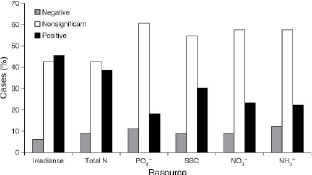 Figure 2. Percentage of species for which each resource was correlated with growth. SBC is the sum of base cations (potassium, magnesium, and calcium). 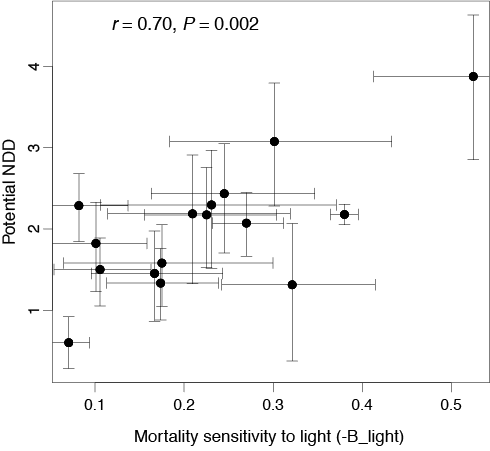 correlated with sensitivity to shading (i.e. shade intolerance). Only species with
significant responses to irradiance and conspecific seedling density were included.

4. The diversity of damage types on leaves increases with local conspecific density (Bachelot and Kobe 2013). 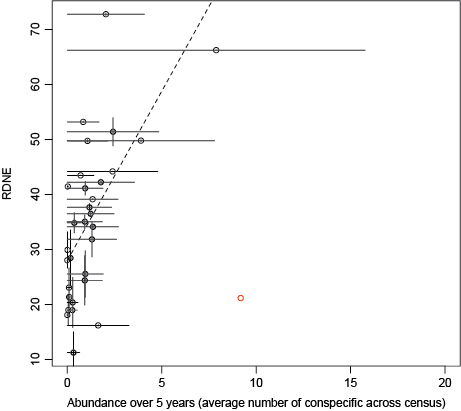 Figure 4. As the global abundance over the past 5 years increases, the

number of natural enemy species increases. Abundance is calculated
as the mean density of conspecific seedlings per m2. Vertical bars
represent the 95% confidence intervals. Pentaclethra macroloba is the
outlier in the lower right-hand corner. When P. macroloba is retained,
abundance over the past 5 year remains significant (P < 0.001,
R2 = 0.04 vs. P < 0.001, R2 = 0.3 when P. macroloba is excluded). 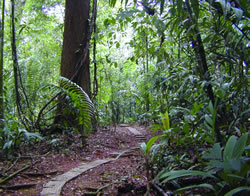 LaSelva is in the Atlantic lowlands of Costa Rica (10º 26’N, 84º 00’ W), with a mean annual rainfall of 4306 mm; during the January to April dry season, mean monthly minimum precipitation typically is > 100 mm. La Selva encompasses a broad gradient in soil fertility from relatively rich entisols and inceptisols of alluvial origin to extensive areas of low fertility ultisols developed on old lava flows (McDade and Hartshorn 1994). To represent landscape-level occurrence of major soils, we established three sites on residual soils and one site each on older and recent alluvial soils. Each of the five sites is centered on a belt transect of 200 contiguous 1m2 quadrats for monitoring seedlings. We mapped, measured diameters, and identified to species all trees > 5 cm diameter at breast height (at 1.37 m), originally in a 20 m buffer around the seedling belt transect. We added an additional 20 m buffer of mapped area to the core area around 2007-2009. Thus, each site is now 280 m length x 81 m width (Fig. 5).

Fig. 5. Layout of each of the 5 sites at LaSelva Biological Station.

Under support from the National Science Foundation (DEB 0075472, DEB 0743609) and Michigan State University, we have collected extensive data sets on seedling dynamics, resource availability, and mature tree dynamics. We are happy to share data from this project, unless plans for external use conflict with the PIs’ plans for publication. We also are happy to collaborate in data interpretation. Please contact Rich Kobe if you are interested in using data from this project. The major data sets are described below. 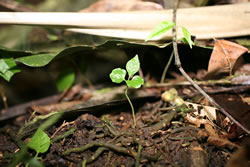 Seedlings: we have monitored seedling establishment, height growth, and survival every six weeks from February 2000 through present in five 1 x 200m belt transects in wet tropical forest at La Selva Biological Station. As of August 2013, there are ~50,000 seedlings of ~400 species and morphospecies in our database. To our knowledge, this short census interval is unprecedented in a long-term study of early seedling establishment.

In each seedling census at a given site, all newly emerging woody dicot (lianas, treelets, and subcanopy and canopy trees) and palm seedlings are marked with numbered tags and identified to species; previously tagged seedlings are monitored for survival. All individuals are measured for height. For each encountered species/ morphospecies, we take digital photographs as voucher specimens, which are archived in a virtual herbarium.

Resources: For each seedling quadrat, we have measured % canopy openness with hemispherical canopy photos in Fall 2000 and in July of 2004, 2006, and 2007 and in February and July of each year since 2008. For soil nutrient analysis, we took a composite of 3 subsamples of the upper 20 cm of mineral soil of each seedling quadrat and 60 additional points in the mapped stand in 2008, for a total of 260 soil samples per site. We analyzed for Mehlich III extractable phosphorus (P), potassium (K), calcium (Ca), and magnesium (Mg), and KCl-extractable inorganic N pools (NH4+ and NO3-).

Trees: We mapped, measured diameters, and identified to species all trees > 5 cm diameter at breast height (at 1.37 m), originally in a 20 m buffer around the seedling belt transect. Diameters have been measured and survival assessed on these trees in the following years:  2000 (although buttresses compromised some of the original measurements, 2005, and roughly every two years thereafter: 2007, 2009, 2011, and 2013.