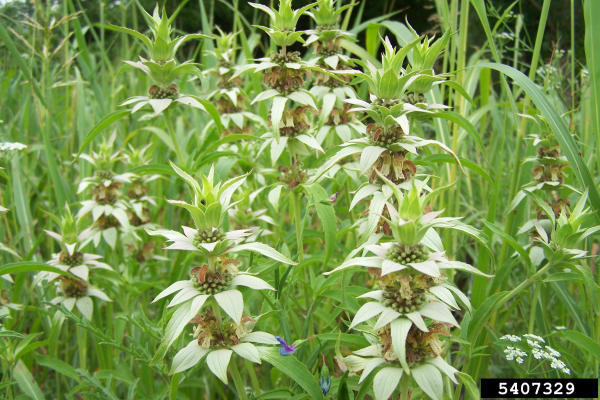 Pale yellow flowers with maroon spots are less visible than the white to pale pink leaves that surround them. It bloomed throughout August. Plants remained short and branched out by the third growing season. A large number did not overwinter from their second to third season of growth. This species was the second most attractive to natural enemies in the late season, with six times as many natural enemies as the grass control.

This plant will grow in full to partial sun, and very dry to average soil moisture. It occurs naturally in sandy areas such as dunes, fields and relic prairies and is often found in disturbed areas including along railroads and roadsides, and in waste places. It may be associated with oak and pine woodlands.

Horsemint can be grown from seed (It flowers in the third year) or plug material (flowers in second year). This species is tolerant of extremely dry conditions.