“Definition:  Nygolaiminae.  Mural tooth located on left submedian wall of stoma at the junction of anterior and posterior parts.  Anterior part lined by a cuticularized guiding sheath, usually adpressed closely to the stoma wall.  A plicated anterior fixed ring surrounds the tip of the tooth when in the position of rest.  Guiding sheath is divided into 2 or 3 sections which are eversible through the fixed anterior ring.  Posterior part of stoma tubular with well-cuticularized lining.  Oesophagus well developed throughout, usually expanded beyond the middle.  Of the 5 oesophageal gland nuclei the dorsal is more posterior than in most doryliams; the first pair of subventrals is well forward and the second pair near the base of the oesophagus.  3 prominent cells mark the junction of oesophagus and intestine.  Ovaries paired, opposed, reflexed.  Spicules dorylaimoid, lateral guiding pieces and a small gubernaculum present Type species:  Nygolaimus pachydermatus Cobb, 1913 syn. N. (N.) pachydermatus Cobb, 1913 (Thorne, 1930).” From Goodey 1963 and Powers and Mullin website http://nematode.unl.edu/ 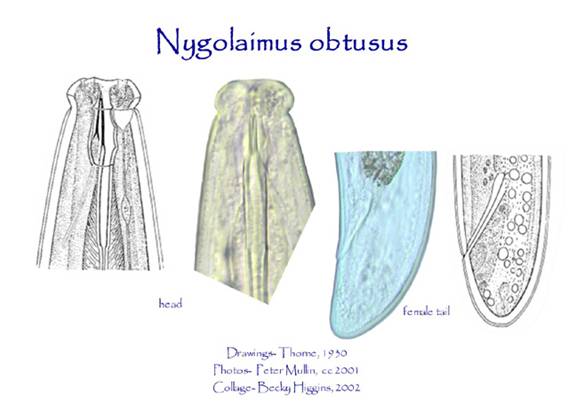 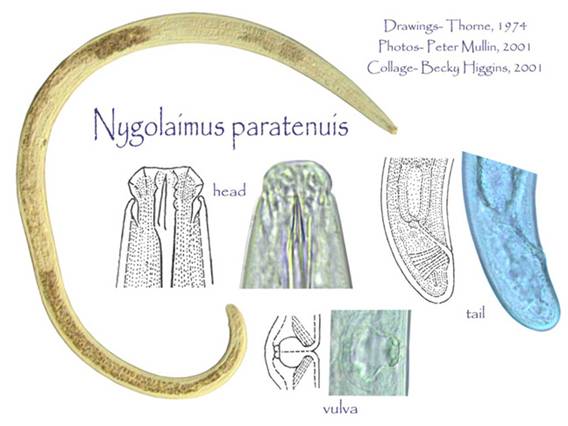