The 2012 weather significantly affected the fruit, but also had an impact on insect levels. Let’s explore the potential effects on obliquebanded leafroller numbers and how management may be impacted.

Our review of the entomological impacts of the 2012 weather continues with a pest of many tree fruit crops, the obliquebanded leafroller. Apple growers have dealt with this pest on a regular basis for many years, as larval feeding on fruit renders it unmarketable. Obliquebanded leafrollers have recently become a serious concern for cherry growers as well. Severe economic losses occur when obliquebanded leafroller larvae are dislodged along with the cherries, contaminating the harvested bins of fruit.

Obliquebanded leafrollers spend the winter as young larvae in a shelter they build called a hibernaculum. The shelters are typically found in protected places on the tree, such as old pruning scars or bark crevices. On apples, young larvae become active in the spring as fruit buds develop. They voraciously feed on the expanding buds and later on fruit clusters and expanding leaves. In a typical year, overwintering obliquebanded leafrollers pupate in May and moth captures hit their peak in June for the first flight. Summer generation larvae feed on leaves and fruit in July with the second flight normally taking place in August and into September.

The spring and summer of 2012, however, was far from a normal year for obliquebanded leafrollers. From the start, this pest proved hard to find. Numbers were so low in spring samples that our obliquebanded leafroller research plans had to be dramatically altered or postponed. Growers can take partial credit for low obliquebanded leafroller levels as they have integrated new efficacious insecticides, such as Altacor and Delegate, into their leafroller control programs. But Mother Nature deserves credit as well. Warm spring temperatures activated young larvae earlier in the spring than normal. Most, if not all, larvae had moved out of their protected shelters prior to the freezes that occurred before and during bloom. We suspect some young larvae succumbed to the below freezing temperatures.

Survivors of the unusual weather emerged as adults in mid-May, a few weeks earlier than normal (Figure 1). Flight of the overwintering generation took place over a relatively short period. The most unique feature of the 2012 flight compared to that in a normal year (e.g., 2011) was the near complete absence of a second generation. Apparently, conditions in the summer were not favorable for obliquebanded leafroller development. Predators likely had a hand in this as a buildup of beneficial insects known to feed on eggs and young lepidopteran larvae (caterpillars) accompanied the limited application of insecticides. Heat and dryness through the summer also took its toll on larvae. Early setting of terminal growth as trees compensated for the hot, dry conditions resulted in a paucity of succulent foliage, the preferred food for developing obliquebanded leafroller larvae. 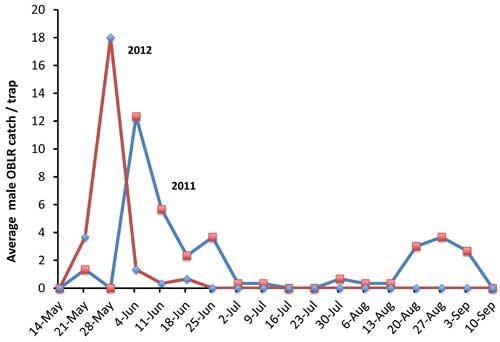 Michigan growers and consultants are well aware of the propensity of obliquebanded leafrollers to develop resistance to insecticides. The older chemistries, including Guthion and the pyrethroids, are no longer very effective. Now is the time to start conserving the new effective materials. One of the ways to do this is to refrain from applying unwarranted calendar-based sprays.

Monitoring for obliquebanded leafrollers has proved difficult, but may be worth the effort in 2013. The first opportunity comes when overwintering larvae, if present, mature and begin feeding on newly expanding terminals. At this time their presence is easy to detect, and if at least 1 percent of the shoots are infested, then this is a good indication that an insecticide treatment will be needed to control the summer generation larvae in July.

The usefulness of the predictions and the various scenarios outlined in the previous Michigan State University Extension article for codling moth, in this one for obliquebanded leafrollers, and in future articles for other insects are dependent upon good monitoring information. The order of the degree of reliability of a management decision, from strongest to weakest, follows the order of the origination of the underlying information as follows:

In other words, taking advantage of the impact of the unusual 2012 weather on insects will require monitoring as many individual orchards as possible this coming season.