The harvest of Michigan peaches in 2013 is expected to be approximately in line with the long-term average. 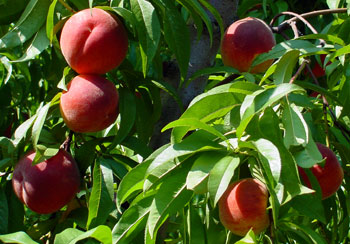 Here is Michigan State University Extension’s 2013 prediction of Redhaven harvest onset for Michigan peach growing regions. The goal is to help growers, shippers, marketers, buyers and visitors to the state plan their season. For Michigan, the start of significant peach volume is with the Redhaven season, providing a handy benchmark time point.

The estimate is based on records collected on commercial Redhaven harvests in Berrien County since 1995. The Redhaven harvest onset model is based on weather data at the Southwest Michigan Research and Extension Center (SWMREC) Enviro-weather station approximately four miles southwest of Benton Harbor, Mich.

Regression analysis was used to determine a relationship between growing degree days and onset of harvest. The resulting predictive equation is D = -0.0386x + 234.9, r2 = 0.752, where x is the cumulative growing degree days (GDD) base 50 degrees Fahrenheit from Jan. 1 through June 3 and D = the estimated harvest day of year (i.e., Jan. 1 = 1 and Dec. 31 = 365 in a non-leap year). The estimation is for the onset of the main season Redhaven harvest, not including fruit with split pits that ripen several days earlier than peaches without split pits.

For 2013, the estimated onset of Redhaven for Berrien County is predicted to be Aug. 2, comparable to the long-term average of Aug. 3 and 10 days behind last year. Over the years, the estimated harvest dates are generally within a few days of the actual observed harvest.

The model was used to estimate Redhaven harvest (non-split pit fruit) for four locations in addition to Berrien County. The spread of harvest dates are predicted to be from Aug. 2 in the southwest corner of Michigan to Aug. 8 at the Northwest Michigan Horticultural Research Station (NWMHRS), northwest of Traverse City, Mich., a difference of six days. The predicted spread between north and south have ranged from four days (2010) to nine days (2009) in recent years.

Remember that other factors such as soil type, proximity to Lake Michigan, crop loads and weather shortly before harvest can affect peach ripening. Due to frost problems in some orchards, crop loads are potentially low in some blocks, but high in many others. A heavier crop delays the harvest date in an individual orchard. There is also evidence from work in California that cooler temperatures following bloom are correlated with larger fruit size.

Table 1. Estimated Redhaven harvest onset in 2013 and 2012 for five locations based on the MSU peach maturity prediction model.

The estimated Redhaven harvest day can also be used to approximate the harvest dates for other varieties by adding or subtracting harvest dates relative to this reference variety (Table 2). As two examples, a rough guess is that PF-1, one of the earliest varieties grown in Michigan, will ripen 30 days before Redhaven, or approximately July 2, and Loring, generally ripening 12 days after Redhaven, will harvest approximately Aug. 14 in Berrien County in 2013.

* = estimated harvest days before (-) or after Redhaven. Harvest order can change depending on the warm/cool characteristics of a season. A cooler year will delay harvest dates, a warmer season will compress the harvest dates closer together.
^ = little experience with this variety to date, ^^ = very little experience to date. LA = low acid type. Harvest order numbers are more tentative with newer selections.