A unique insect that feeds both Great Lakes fish and birds

Midge flies after emerging from the water form clouds that look from a distance like smoke plumes.

A group of insects found in the Great Lakes region known as chironomids or midge flies play an important ecological role in and around the Great Lakes. The larval state of the midge fly, often referred to as a bloodworm, lives on the bottom of a lake or stream. The larval state of this insect is called a bloodworm because of the hemoglobin that they contain giving them the blood red appearance. Just like our hemoglobin that is used to bind oxygen in our blood stream the larval midge fly also uses hemoglobin to extract oxygen from the water.

On the bottom of a lake or stream the larval midge fly feeds on algae and detritus where they live in tubular holes in the sediment. They construct small tubes made up of dead leaves or particles of sand or clay fastened together with viscous threads. These tubes at times can be seen on submerged stones or aquatic vegetation. Since the larval midge fly contains hemoglobin they can live in oxygen depleted mud. They can also live freely amongst the bottom debris or aquatic plants and at times venture into the water column where they are vulnerable to predators such as fish.

Adult midge flies are short lived after emergence from the water and survive for only several days for reproduction. They form massive clouds in the air where the females and males mate. It is at this time that they provide valuable food for birds and bats. The massive swarming behavior of the midge fly can create a nuisance for humans especially if they are encountered along the highway where they can quickly grease up windshields and headlights. 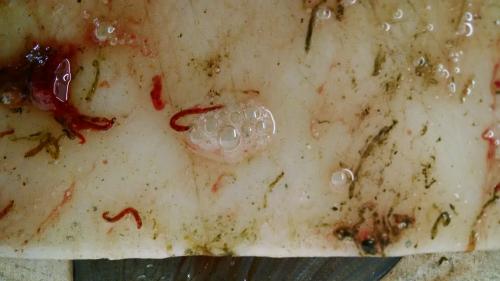 The midge fly adult looks like a mosquito but it does not bite. But like a mosquito it does deposit its eggs on the surface of the water where they absorb water and sink to the bottom. The eggs hatch in several days into the larval forms of the bloodworm where it molts several times as it grows continuing its life cycle.

Michigan Sea Grant and Michigan State University Extension work closely with the Great Lakes tribal and state licensed commercial fishing industry. The commercial fishers have reported in recent years that the diets of Great Lakes whitefish do contain the chironomid larvae or bloodworm. In fact, lake whitefish may rely more on this food source since the disappearance of Diaporeia from Lakes Michigan and Huron as a result of the zebra and quagga mussel invasion. Diaporeia in the past was a valuable food source for Great Lakes whitefish.