Amazing revelation: Some Pacific salmon DO feed during spawning run

Anglers in Michigan rivers have long known that Chinook and coho salmon will bite on eggs and egg imitations. Salmon were believed to stop feeding in rivers, but recent research suggests this isn’t always the case.

Conventional wisdom is a funny thing – especially when it comes to Chinook and coho salmon in rivers. When these Pacific salmon species were initially stocked in Great Lakes waters, most people assumed that they would not bite once they entered rivers near the end of their life cycle. Snagging was legal for decades, in part, because of this erroneous assumption. If a stocked fish won’t bite, then why let it go to waste?

There is no doubt that salmon can be tough to catch once they enter rivers, but they will hit stickbaits, spinners, and a variety of other lures in addition to skein and spawn bags, if conditions are right. Anglers who take advantage of this fact have long assumed that salmon hit strictly out of aggression or some feeding reflex left over from time spent in the big lake or ocean.  While this might be true in the case of lures, new research suggests that (at least in some Alaskan rivers) salmon can, and do, continue to feed in rivers. 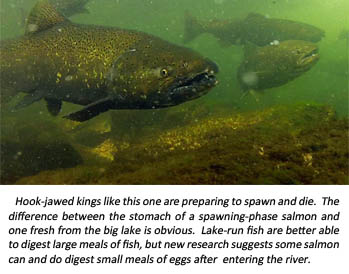 The preferred – in fact, the only – food item found in salmon stomachs was salmon eggs. This much should come as no surprise as salmon are often caught as they mouth skein or spawn bags on an angler’s hook. Salmon obviously have a taste for their own eggs (or the eggs of other salmon, at least), but in some cases, they actually digest and derive energetic benefits from egg predation.

One coho jack was found to have 159 eggs in its stomach, and 13 percent of all salmon examined had consumed at least one egg. This type of feeding may prolong the life of spawning salmon slightly and give them a bit of extra energy for their difficult journey upstream and subsequent battles for prime breeding grounds and mates.

Some Alaskan rivers had higher feeding rates (up to 40 percent of female cohos ate eggs in one river) while others had lower feeding rates. Might Great Lakes salmon eat during their spawning run, or does the conventional belief that stomachs harden and shrink to the point of digestive atrophy hold true? While there is no published research available for Great Lakes runs, curious anglers might want to start checking stomachs when cleaning river-run salmon.