Animal feeding damage and the landscape

What to do when deer, rabbits and mice are winter “pruning” your bushes.

I can't begin to imagine how bad landscapes are going to look this spring when we finally thaw out. The snow has piled up around trees and shrubs while huge ice chunks have fallen off the roof decimating shrubs under the drip line. Road and sidewalk salt have been used liberally this winter, and chewing vermin of the four-legged-kind are eating whatever they find under or above the snow. We're certainly in for a number of complaints from worried gardeners come spring.

Last year I observed a huge burning bush that had been severely girdled just above the snow line by rabbits. The funny thing was that I squealed with delight and asked the homeowner not to get rid of the "evidence" until I had time to snap a few pictures. Of course, he wondered what I was smiling about since it appeared that the little varmints have destroyed his prized, red-leaved wonder. From my point of view, not only did I have an excellent opportunity to record a "teachable moment" but had good reason to suggest pruning back a severely overgrown shrub!

Kidding aside, rabbits, mice and deer have really taken a bite out of many types of plant material in the landscape due to heavy snowfall and the scarcity of food. Burning bushes probably will recover, but many species of plants will not. Part of determining whether or not the plant will survive is where and how much of the “cambium” has been chewed away. The cambium is the living tissue just underneath the bark. This provides the plant the ability to produce new vascular tissue from one year to the next. When an animal chews this completely away, horticulturists say the plant has been “girdled.” In some cases this is fatal and in others not.

Rabbit damage is commonly found above the snow line, which in the above-mentioned example was about 24 inches off the ground. Rabbits typically do a thorough job of eating every scrap of bark on the shrub within the reachable area. People often misdiagnose this problem because they don't notice it until the snow disappears. It's assumed that a pretty tall animal did the damage. Creating a physical barrier such as a tree-wrap or chicken wire collar is one method to prevent damage, but it is unlikely that anyone would wrap literally every twig of a burning bush. Trapping the animals can reduce populations, but you know how they can multiply. Native predators such as hawks or owls can keep rabbit numbers in check, but if the habitat is not conducive for these birds of prey they will dine out elsewhere.

Mice and voles feed underneath the snow line (sometimes under the mulch too) and most damage will not be noticed until all the white stuff has melted. This is sometimes the worst type of damage because mice prefer species such as apple, cherry, and pear. These plants can be reclaimed with creative grafting techniques but are not likely to be successful for the average homeowner. Mice will also feed on pines, spruce and juniper using the inner twigs to climb up into the canopy and feed beneath a dense cover of snow. If the pines are completely girdled they will die. Older shrubs like juniper probably will be so disfigured the only option is to tear them out and start over.

Many times deer just "browse" on shoot tips of plants such as arborvitae or Taxus (yew) that eventually will re-grow. Sometimes they feed on side shoots and while doing so rip off a valuable scaffold branch. Most of the time corrective pruning can hide the evidence of such damage, but for many plants their natural beauty has been destroyed. Deer are fairly receptive to a variety of repellants. These must be applied regularly, however as they are washed away by rainfall and lose their effectiveness.

All in all, these problems are best handled by exclusion techniques not after-the-fact corrective pruning. I would suggest that if you have problems this spring, you write yourself a note and slip into your date book for October to employ protective techniques.

You can read Rebecca Finneran’s blog on-line at www.stuckongardening.com 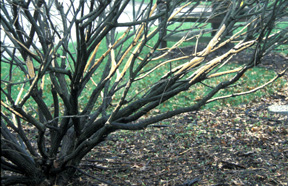 Rabbits chewing above the snow line will decimate certain shrubs like Burning Bush. 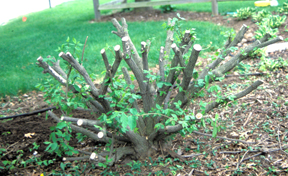 Pruning at the girdled level will force new buds out beneath. With in two seasons, the shrub will look like new. 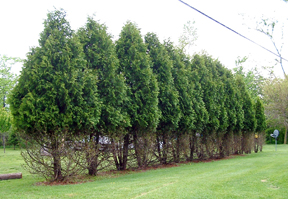