Apple maturity in 2014 is slower than expected

An unusual weather year is leading to slower than expected apple maturity. Growers need to plan carefully to get the best conditioned fruit into controlled atmosphere storage.

Apple fruit across the state are slow to mature this year (2014). While color and size are good, percent soluble solids are about 1 percent lower than normal. In addition, ethylene levels are significantly lower than what might be considered typical for the 10 or so varieties Michigan State University Extension has been tracking in the apple maturity program. These low ethylene levels may be affecting the formation of the abscission zone for the fruit, resulting in apples that are less prone to drop or be knocked off during harvest.

It seems reasonable to assume that the unusual weather we have had this year is somehow related to fruit condition, in both positive and negative ways. Cool nights have translated into intense color formation, but we are beginning to see the red pigment bleeding into the flesh in some locations. The relatively abundant rainfall has contributed to good fruit size, but “watery” fruit do not typically store well. In fact, the low brix noted may in part be due to the availability of water. Further, the cool season and low light levels during the season may have further limited photosynthesis, preventing the accumulation of sugars to their normal levels.

An analysis of the insolation, or incoming light from the sun, reveals that 2014 has the lowest level of accumulated sunlight, measured from June 1 to Sept. 22, 2014, in the 18 years the automated weather system has been acquiring data (see graphs at end of article). This year was also a low growing degree day (GDD) accumulation year, lower than any year except 2009 in the time period examined. Interestingly, the maximum amount of light reaching the fruit tree canopy for a given season seems to be declining over the last 18 years. That means the brightest day for 2014 was approximately 10 percent less bright than the late 90s.

Finally, the relative amount of light for 2014 is about 12 percent less than the average for the last 18 years. Taken together, the data suggests that this was a tough year for fruit trees to accumulate photosynthate; it was cool and cloudy. The tree must make decisions about how to allocate the carbon it takes up, so as some of it is put away for next year, there is less to spare for the fruit, leading to low sugar levels. It may well be that these low sugar levels are also slowing development of the fruit as measured by our low ethylene levels.

In any case, this is an unusual year, so it is best to be prepared to handle the fruit as carefully as possible. My recommendation would be to plan for earlier rather than later harvests, monitor and control CO2 levels for sensitive varieties, and make sure that temperatures are elevated for chilling sensitive varieties.

Insolation and GDD for Sparta, Michigan since 1997 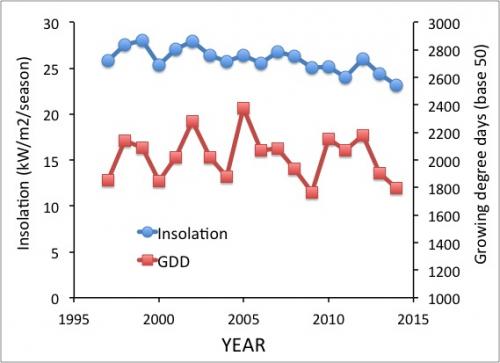 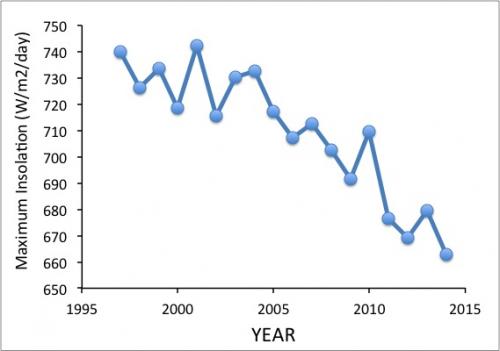 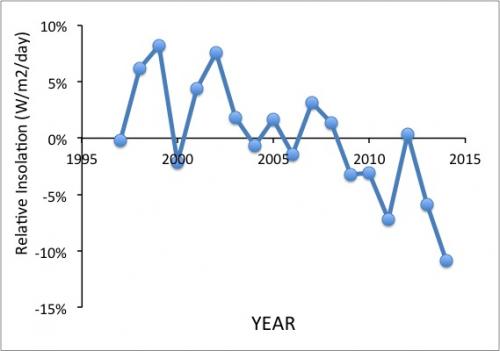 Dr. Beaudry's work is funded in part by MSU's AgBioResearch.