On a recent visit to a Christmas tree plantation, we observed several dead and dying trees. This normally would suggest Phytophthora root rot as the causal agent of the diseased trees. However, a closer look indicated somewhat of a surprise. Most of these trees had Amillaria root rot infected stems. Most recently, we have found Armillaria root rot killing Fraser and balsam fir, Douglas-fir and Black Hills spruce.

Normally you will see the quick death of the trees, but a closer inspection reveals a swollen area at the root collar and the ever-present white mycelial mats completely girdling the wood under the dead bark at the soil line. These trees were dying in sections (Photo 1) and the Armillaria infection was moving up the stem as a canker. Infected trees exhibit symptoms similar to other root diseases. In otherwise healthy trees, crown symptoms may take several years to develop and may be accompanied by branch and shoot dieback and premature foliage loss. However, in weakened trees, foliage may rapidly turn color with tree death occurring soon after. 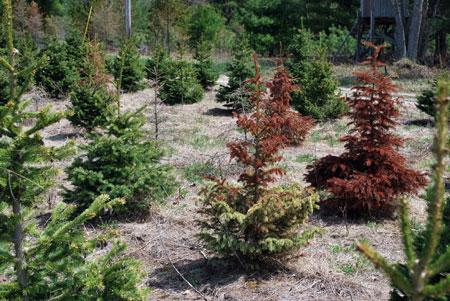 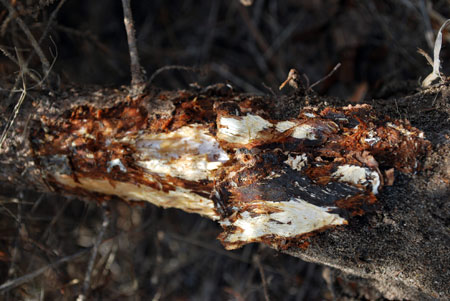 Photo 2 - White mycelial fan can often be found under the bark of trees infected with Armillaria root rot.

Armillaria root rot can be caused by several species of Armillaria and for diagnosis and management, knowing the species is not that critical. This fungal pathogen attacks several hundred woody species, as well as some herbaceous plants. It is particularly common to forested areas or areas that had been forested. Armillaria exists most of its life as a saprophyte, but it can infect trees that are weakened by stresses. Sometimes, it can even infect healthy trees, which are killed outright or are weakened, leaving them vulnerable to other pathogens or environmental stresses.

Armillaria produces rhizomorphs, which grow under the bark of dead or dying trees and stumps. When a rhizomorph comes into contact with a root of a host species, the fungal mycelium adheres to and then penetrates the root by secreting digestive enzymes. The fungus is then able to grow through the root and subsequently up into the trunk. Armillaria can also spread from tree to tree through root grafts.

Since Armillaria is a natural component of the forest ecosystem, it is not possible to try to eradicate the fungus. The best way to control the disease is to prevent trees from becoming stressed. Remove dead trees and the stumps from previous plantings. Avoid planting into cut over sites, especially those with stumps. In areas where Armillaria has been a problem, do not continue to plant susceptible trees. Keep trees as healthy and as vigorous as possible.