Although considered to be a southern pest, bagworms can cause serious defoliation injury to Michigan trees.

Jeremy Hertz, the Family Tree Doctor in Howell, Mich., was recently called out to a “u-store-it” storage facility near Romulus, Mich., to help with an insect that was defoliating a large Norway maple tree. When he arrived at the site the tree was almost completely defoliated and there were hundreds of little brown cases hanging from threads from the tree. He called me right there and then to report an outbreak of “maple casebearer.” Later that same day, Jeremy brought me some specimens of the culprits. They weren’t maple casebearers; they were bagworms, Thyridopteryx ephemeraeformis (Lepidoptera: Psychidae). Bagworms are considered to be a southern pest, though I have observed bagworms feeding on wild huckleberry along the banks of the Blind Sucker River near Grand Marais, Mich., just south of Lake Superior while trout fishing. Apparently the deep winter snow protects the eggs from the frigid Upper Peninsula winter temperatures.

It is true, however, that most serious bagworm injury to landscape trees and shrubs occurs in southern states east of the Mississippi River. The caterpillar is reported to feed on over 100 plant species, including both conifers and deciduous trees. The insect overwinters in the egg stage. In the mid-Atlantic states, the eggs begin to hatch in late May and early June, and the newly hatched immediately begin to feed and construct their cases or bags. The bag is made of silk and bits of twig and the foliage that the caterpillar is feeding on. When the larva is small, it feeds on the upper leaf surface with the bag pointed upward. When feeding on deciduous trees, older larvae move to the underside of the leaf where they eat everything except for the larger veins.

The larva pupates inside the bag. Like most members of the family Psychidae, the female bagworm never looks like a moth, she remains “larviform” without wings, eyes, antennae and functional mouthparts. The male moth emerges from his bag, flies to a female, mates and dies within a few days. Mated females lay between 500 and 1,000 eggs in single mass within the bag where they remain until the following spring.

Since females cannot fly, dispersal of the bagworm from one plant to another depends on the movement of the caterpillar. As the Norway maple tree in Romulus, Mich., bears out, this limited movement can result in a single host plant harboring a huge population of bagworms in a single season. 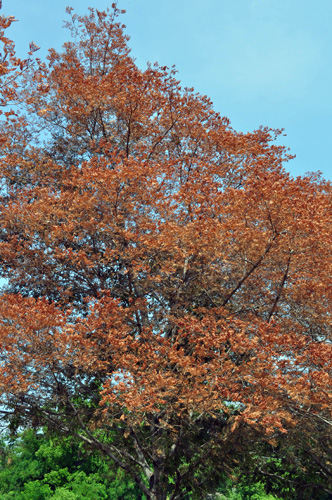 Here’s what a Norway maple looks like when it has been
defoliated by bagworms. Photo credit: Larry Zuckerman, Westland, Mich. 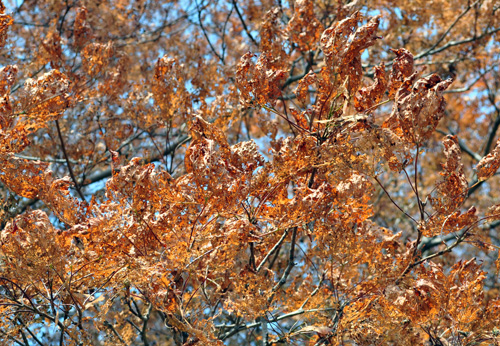 The brown, tattered remains of the leaves after the bagworms had finished with them.
Photo credit: Larry Zuckerman, Westland, Mich. 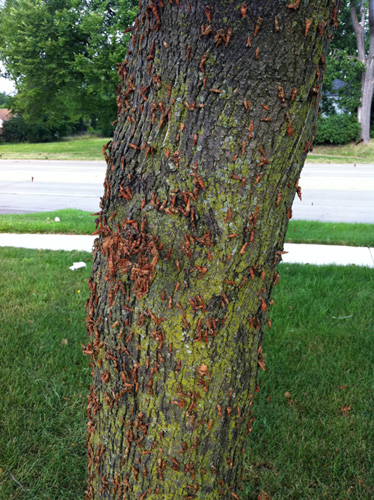 An aggregation of bagworms on the trunk of the tree.
Photo credit: Jeremy Hertz, Family Tree Doctor, Howell, Mich. 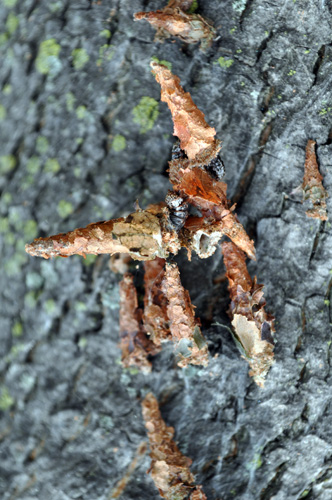 A close up of the bagworms sticking out of their bags.
Photo credit: Larry Zuckerman, Westland, Mich. 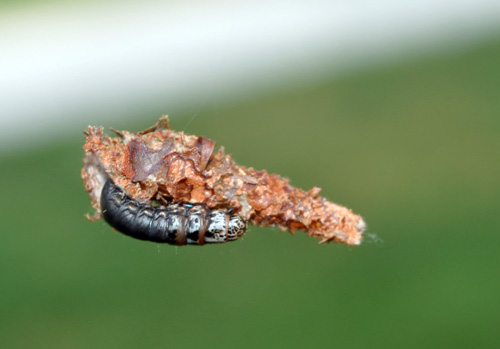 A bagworm that has nearly crawled out of its protective bag.
Photo credit: Larry Zuckerman, Westland, Mich. 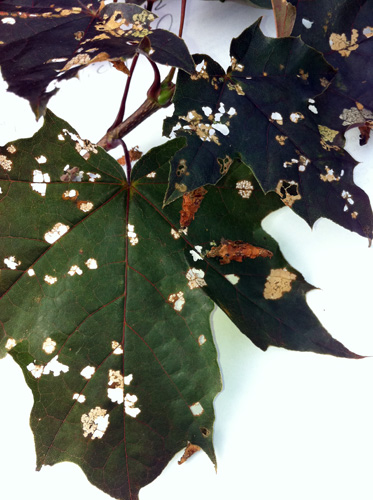