Things to keep in mind when being asked to sign a ballot petition in Michigan.

The Michigan Board of Canvassers held their August meeting last week and approved three more petitions for circulation, meaning three more groups can now begin collecting signatures in an effort to get their proposals on the 2018 ballot in Michigan. This brings the number of groups who have filed petition forms with the Board of Canvassers to eight, with some of them having received approval as to form, and others having not yet received approval. To learn more about how initiated legislation ends up on the ballot, read “How does a ballot proposal get on the ballot?”.

With a significant number of ballot initiatives active this year, working towards getting on the 2018 ballot, there are some important things to remember when you are being asked to sign a petition for a ballot initiative: 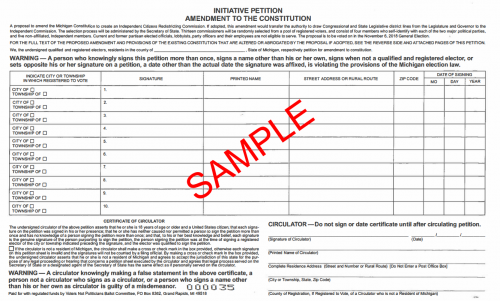 So what petitions should you be on the lookout for? So far, the Board of Canvassers has approved six petitions as to form. Approval as to form simply means the petition meets formatting requirements and the language is pre-approved. These include:

Note that it is not always clear from the name what the intent of the petition is. Again, read the petition before you sign it. Some of these groups are actively collecting signatures, such as the Coalition to Regulate Marijuana Like Alcohol, which reports that it has over 200,000 signatures so far. Others, like MI Time to Care, have had their petition approved, but not yet begun collecting signatures.

Redistricting and Communities of Interest

Local Government Codes of Conduct: Going Beyond the Minimum

A zoning moratorium should only be done with caution