Be on the lookout for a new plant disease, boxwood blight

A new disease of boxwood named boxwood blight (Claonectria pseudonaviculata or Cylindrocladium buxicola) has been detected in parts of the eastern United States. A new MSU Extension factsheet helps identify the symptoms of this serious plant problem.

In October 2011, boxwood blight (Claonectria pseudonaviculata or Cylindrocladium buxicola) was first detected in the United States by plant pathologists in Connecticut and North Carolina. Currently, Connecticut, Maryland, Maine, North Carolina, New York, Ohio, Oregon, Pennsylvania, Rhode Island and Virginia have all reported boxwood blight. It has also been found in British Columbia, Canada. The prediction is that boxwood blight will continue to be detected in many other states. 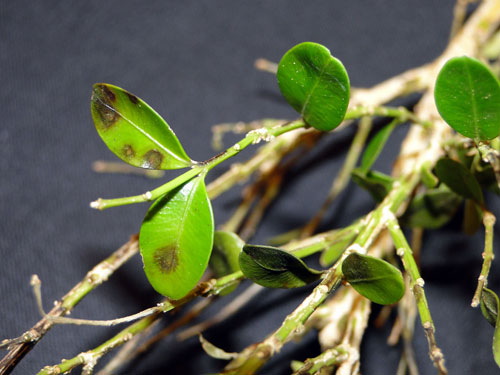