Black vine weevil feeds on the roots and leaves of rhododendrons and many other broadleaved evergreens.

Rhododendrons are prized for their magnificent blooms in the spring and for deep green evergreen foliage that provides winter interest. Few insects are serious pests of rhododendrons, but a type of weevil leaves foliage tattered from its feeding. The black vine weevil, Otiorhynuchus saleatus, feeds on rhododendron plants throughout its life cycle. Weevil larvae, or grubs, live in the soil and feed on roots of the plant and as adult weevils they chew holes in the leaves of the plant. When moisture levels in the soil are high, the grubs may move up near the soil surface and feed at the base of the plants, girdling the stem which damages the plants ability to transport water from the soil. The adult black vine weevils feeding is often identified by its characteristic circular notches in the foliage. This insect feeds on many plants beyond the rhododendron, including yews, hemlock trees and many broadleaved evergreen plants.

Often, MSU Extension receives calls from frustrated homeowners at a loss for what is causing the damage to their rhododendrons. They see a lot of feeding damage, but no insects causing it. The reason for this is that black vine weevils feed at night and can often be seen with a flash light feeding on plants. The weevil is also seen indoors wandering about. This may be a result of the insect seeking shelter. The insect is about 3/8 inches long, oblong in shape, black to a dark gray, antennae are distinctly elbowed, and wing covers have small pits and patches of short, yellowish hairs. Also, as with all weevils, the black vine weevils have a snout. 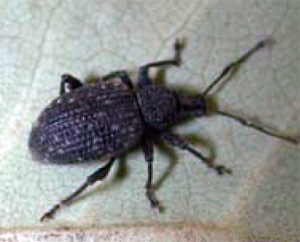 Managing this pest requires an understanding of its life cycle. The insect survives the winter as a grub and begins to emerge as an adult weevil at 400 growing degree days, which on average occurs in late May to early June in Michigan’s Lower Peninsula and early to late June in Michigan’s Upper Peninsula.

Control measures are usually directed to the emergence of the adult weevil with pesticides sprayed directly on the plant to target feeding weevils. Pesticide treatment should be done within the first couple weeks after finding the first damage to new leaves. Biological controls using nematodes produce variable results and must be applied to moist soil to target young larvae in mid to late summer, but mulch would need to be pulled back to apply nematodes to the soil. These control measures, as well as habitat modification, can be found at the Ohio State University Extension Black Vine Weevil factsheet and the Maryland Cooperative Extension Controlling a Major Nursery Pest: Black Vine Weevil factsheet. 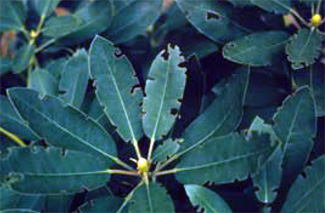 Cicada killer wasps are no cause for concern

Gypsum as a soil additive: use it or lose it?