Although rare in Michigan, the most hazardous blister beetle species can be irritating to livestock, pets and humans. They are occasional garden pests and handling them too roughly without protection can cause skin blisters.

Many insects contain toxic or distasteful compounds that protect them from being preyed upon by larger organisms. Some, such as blister beetles, release their toxins through joints in their appendages in a behavior known as “reflexive bleeding.” Although the most hazardous species are rare in Michigan, these beetles are potentially irritating to livestock, pets and humans.

The adult blister beetles found in Michigan are relatively soft-bodied, dark insects ranging from 0.5 to 1.25 inches in length. The visible part of their thorax is narrower than the head and the abdomen. Their front wings do not extend over the tip of the abdomen; in the case of the oil beetle (shown below, the Meloe genus), the front wings only cover a small portion of the abdomen.

Adult blister beetles feed on the foliage or flowers of many species of plants and are occasionally pests in vegetable gardens. The immature stages are rarely seen, as they live either in the soil or nests of bees where they feed on eggs or larval insects. Some species are quite beneficial as they attack grasshopper eggs in the soil. 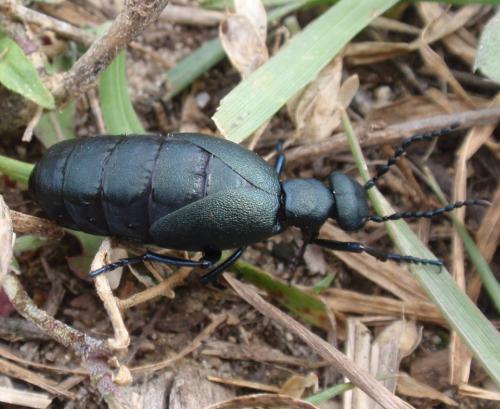 Blister beetle in the genus Meloe. 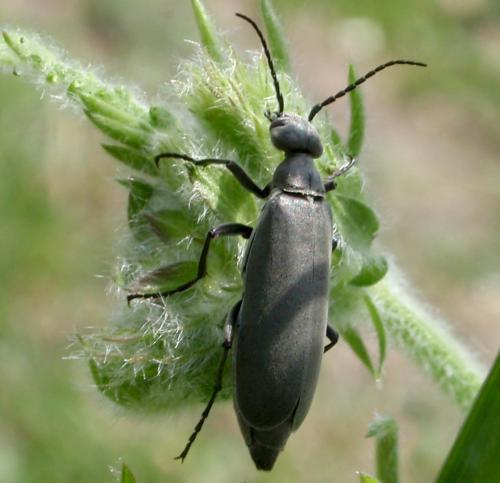 Blister beetle in the genus Epicauta.

If you do encounter these beetles in your garden, wear rubber or plastic gloves to remove them from plants. Cloth garden gloves will not protect you from the toxic irritant that oozes from their bodies. You can also spray them with a contact insecticide labeled for home garden use against blister beetles. If you do choose to use an insecticide, be mindful of the fact that dead beetles will still contain the same amount of toxin and it will not degrade much over time. Carefully remove the dead beetles to a place where they are safe from contact by children or pets.

Alternatively, if the blister beetle damage to your plants is tolerable, a do-nothing-approach may be best. The beetles will eventually choose to safely leave your garden on their own. Please be sure to always carefully read and follow pesticide label directions.

Lily leaf beetle: Watch out for this garden pest