Blood sucking parasites that start with the letter “B”: Bird mites, bed bugs and bat bugs

We received samples of all three of these “B” guys last week. The bird mites were sent in by a woman who found a bird nest in her bathroom vent. The bat bugs came from a client who knew he had a colony of bats roosting on the outside of his home. The bed bugs were found by the client in his bed (go figure) and he reported red bumps and itching (not surprising).

The eastern bat bug, Cimex adjunctus (Cimicidae) and the common bed bug, Cimex lectuarius (:Cimicidae) are nearly identical in appearance. I consider bat bugs much less of a problem than bed bugs because bat bugs cannot persist without their primary host, bats. And even though bed bugs are often associated with roosting bats, they can successfully reproduce on our blood and hence persist in the absence of bats. Bat bugs will readily bite people, but this usually only occurs when the insect cannot find its preferred host or when there are so many of them that a small migration occurs. Long term control of bat bugs begins with ridding the structure of bats and permanently preventing them from returning. This can be difficult and the services of a reliable pest control company should be considered.

The easiest way to distinguish a bed bug from a bat bug is to compare the length of the hairs on the lateral margins of the pronotum (the body section directly behind the head) with the width of the eye. These hairs on a bat bug are longer than the width of the eyes while these hairs of a bed bug are shorter than the width of the eyes.The following sheet is from the Ohio State University web page http://ohioline.osu.edu/hyg-fact/2000/2105.html regarding the resurgence of the bed bugs. “In the past decade, bed bugs have begun making a comeback across the United States, although they are not considered to be a major pest. The widespread use of baits rather than insecticide sprays for ant and cockroach control is a factor that has been implicated in their return. Bed bugs are blood feeders that do not feed on ant and cockroach baits. International travel and commerce are thought to facilitate the spread of these insect hitchhikers, because eggs, young and adult bed bugs are readily transported in luggage, clothing, bedding, and furniture. Bed bugs can infest airplanes, ships, trains, and buses. Bed bugs are most frequently found in dwellings with a high rate of occupant turnover, such as hotels, motels, hostels, dormitories, shelters, apartment complexes, tenements, and prisons. Such infestations usually are not a reflection of poor hygiene or bad housekeeping." 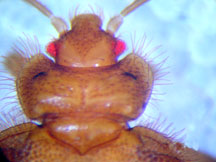 A close up of the head of a bat bug. Note
that hairs on the edge of the pronotum
are longer than the eye is wide.
Photo credit: H. Russell. 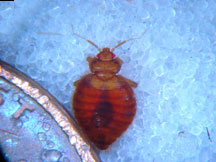 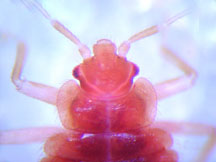 A close up of the head of a bed bug. Note
that hairs on the edge of the pronotum
are shorter than the eye is wide.
Photo credit: H. Russell. 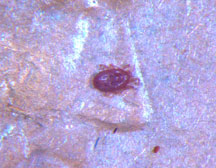 A bird mite on a penny.
Photo credit: H. Russell. 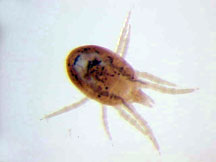 Gypsum as a soil additive: use it or lose it?

Automatic hitches make it easier to connect to implements