Blue spruce in Michigan suffers from a serious needle casting disease caused by the fungus Rhizosphaera. Well-timed sprays in the spring will normally suppress Rhizosphaera to non-detectable levels in the population of trees. However, in some plantations needle casting symptoms still occur after sprays (Photos 1 and 2). The casting needles turn purple or brown, die and drop off the stems (Photo 3). In many of these sprayed plantations another fungus called Stigmina may be found infecting needles. We still do not know for sure if this fungus is completely responsible for these symptoms after spraying for Rhizosphaera. It could be that you have not completely managed Rhizosphaera. Because Stigmina is so new, we still do not know much about this fungus, but we do know what controls Rhizosphaera. 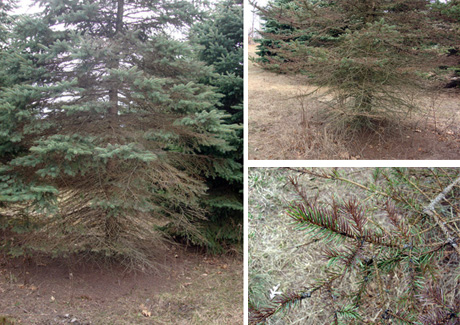 We have also noticed that Stigmina this new needle infecting fungus is frequently found on the north side of the trees, in high density plantings, and on wet ground. In other words, when the needles stay wet there is a greater chance of Stigmina infecting the needles. To help manage Stigmina, consider better air drainage, greater planting distance between trees and better site selection (Photo 4). To help you save money, time and the environment, it is important to monitor for the amount of needle cast in your plantings before initiating a spray program. To determine if your trees warrant chemical management, look for signs of fungal fruiting bodies on the needles. These fruiting bodies are producing the spores that will infect the new needles as they break bud. With a hand lens, scan the discolored needles. For Rhizosphaeria of spruce, randomly select 20 or more trees scattered around the plantation, and remove three sample branches from each tree. Examine the white rows of stomata on two-year-old needles and if half of the branches have dark fruiting bodies on more than 10 percent of the needles, consider treating the entire plantation. Needle casting disease of spruce is currently managed with fungicides after the new growth has expanded to 0.5 to 2.0 inches in length, typically in May. Again, if you apply fungicides for needle cast disease, we ask you to make one of those applications one month after your first application. 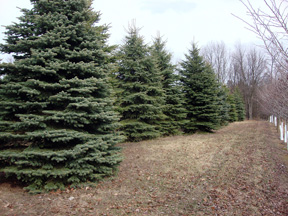 Photo 4 shows the southern exposure of trees in the plantation. To get better management, try providing better air drainage and spraying one month after your first spray is applied.