In 1999, a specimen was found in a Rutgers University blacklight trap about 30 miles east of Allentown in Milford, New Jersey. Since that time, specimens have been identified in 29 states, primarily in the Mid-Atlantic region but with additional populations in Oregon and Southern California. Midwestern populations of BMSB were found in Ohio in 2007, Illinois in 2009 and in Michigan in 2011. As with many other invasive species, the distribution is likely spread wider than reported.

Brown marmorated stink bug adults have the shield-shaped body typical of most stink bug species. The body is mottled brown with coppery or blue metallic colored punctures on the head and pronotum. Adult bugs measure 12 to 17 mm long (approximately a half inch). Its most distinguishing characteristic is black antennae with a white band between the fourth and fifth antennal segments in both nymphs and adults. Eggs are light green and are oviposited in clusters of about 28 barrel-shaped eggs on the underside of leaves. 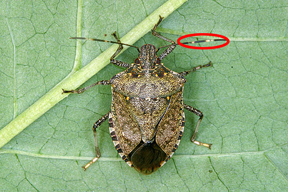 There are five nymphal instars that have the characteristic antennal markings (second through fifth) plus a white band on the tibia (third through fifth). Dark red eyes and a yellowish-red abdomen in the first instar are also characteristic of immature stages. Abdominal coloration gradually turns to off-white with reddish spots in later instars. Wing pads are easily recognizable in the fifth instar. Both immatures and adults have contrasting white and dark bands on the outer edge of the abdomen. All life stages emit a pungent odor when disturbed. 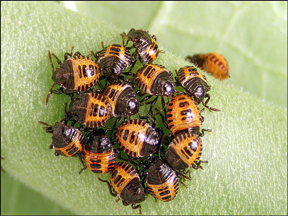 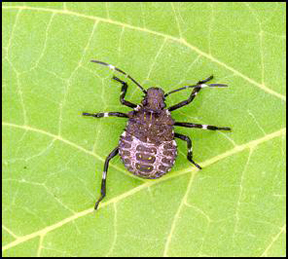 Brown marmorated stink bug is native to Asia where it is an occasional pest of tree fruit and legumes. A preferred Asian host is the Princess Tree, Paulownia tomentosa, which acts as an early season host in the United States. Other early season hosts include apple, cherry and pear trees. Brown marmorated stinkbug has a host range of over 300 plants including many agricultural and ornamental crops. Feeding damage has been recorded in high value specialty crops including tomatoes, sweet peppers, raspberries, apples, peaches, pears and cherries as well as damage in corn and soybeans.

In Northern regions, such as Michigan, BMSB will likely have one generation per year. It requires 538 degree days (10oC base) to develop from egg to adult. An additional 148 DD are required for female maturation at 77oF. In Allentown, Pennsylvania, an appropriate biofix to begin DD accumulations is when P. tomentosa is in full leaf. In northern states, adults emerge from overwintering sites in mid-spring, mate and begin ovipositing the first week of June. Where it has one generation, the nymphs develop and feed throughout the summer, molting to the adult stage at the end of July/beginning of August when there is a large peak in flight activity. High densities of the insect are very noticeable at this time as is feeding damage on susceptible plants. This “fall” generation continues to feed before moving to overwintering sites beginning in early September. Migration to overwintering sites is both temperature and day length induced.

BMSB is a sucking insect that inserts its proboscis into plant tissue to extract plant fluids. During feeding the surrounding cells are killed by digestive enzymes resulting in the formation of small necrotic areas at the feeding site. These areas appear corky, pithy or sunken, depending on crop phenology. In apples and peaches, feeding immediately following bloom causes the fruit to abort prematurely. Mid-season feeding can result in the characteristic “cat-facing” damage typical of plant bugs. Late season feeding results in pithy or sunken regions of mature fruit. This type of feeding damage makes the fruit or vegetables unmarketable for fresh market sales. 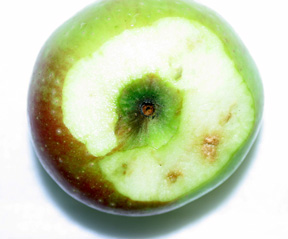 Damage in corn caused failure of the kernels to develop and delayed senescence in soybean as well as causing pod discoloration and distortion. Damage from the bug can be very extensive.

For example, in 2006 and 2007 in New Jersey and Pennsylvania, commercial farmers using Integrated Pest Management (IPM) had a minimum of 25% fruit per tree that were damaged by stink bug feeding with upwards of 90% in apples and pears. Damage at these farms was attributed to BMSB because it was the dominant stink bug species at all sites. In soybeans, BMSB were present in densities surpassing treatment thresholds established for other stink bug species in southern regions. However, no pest management thresholds for BMSB have been established in any commodity.

Nuisance in homes and structures

In addition to being an agricultural pest, BMSB adults are a nuisance to homeowners. Adults overwinter in structures, such as houses, congregating on the outside of homes in early-mid September and moving indoors as temperatures become cooler. Once inside, they seek shelter and may not be noticeable except on warm days when they may become active. Their nuisance behavior is caused by large numbers congregating on or in the structure and by their offensive odor that is released when they are disturbed. During the winter months, the adults do not mate or feed and BMSB is not known to bite humans or pets. Adults leave overwintering sites in the spring as temperatures and day length increase.

Brown marmorated stink bug can be monitored using attractant-baited traps, sweep nets or beating tray samples, and blacklight traps. Adults and nymphs are attracted to an aggregation pheromone, which in combination with pyramid traps has potential to monitor densities and dispersal of existing populations. Sweep net and beat samples are efficient monitoring methods to identify seasonality and density in a crop. However, only blacklight traps were effective in New Jersey at detecting new populations before damage was apparent in crops.

At present entomologists are still developing control programs for BMSB in agricultural crops. While pyrethroid and neo-nicotinoid insecticides have shown promise in laboratory trials against adult and fifth instars, these chemicals are restricted during the period of peak populations in tree fruit and have had mixed results in the field. Rutgers University has screened numerous insecticides against adult BMSB. Please follow label instructions, as well as proper safety and application procedures. Insecticides with ß-cyfluthrin, Bifenthrin, Cyfluthrin, Deltamethrin and λ-cyhalothrin as an active ingredient caused mortality in the laboratory.

A newly described egg parasitoid species, Trissolcus halyomorphae Yang (Hymenoptera: Scelionidae) has been identified as the primary biological control agent responsible for the management of BMSB in northern China. This parasitoid causes 50% egg mortality and is the only natural enemy identified with a mortality rate exceeding 10%. Trissolcus halyomorphae has not been found in North America and endemic North American egg parasitoids cause less than 10% mortality (K. Hoelmer personal communication).

In homes, people have a few options to minimize the number of BMSB adults inside. The best option is to prevent them from entering buildings. Exclusion methods such as caulking windows and doors and removing window air conditioners have shown to be helpful. Exterior insecticide applications as a perimeter spray may be helpful at reducing large numbers of adults entering the home, but timing is important and should be done at the beginning of the overwintering flight when adults begin to appear on the outside of the house. Once inside, they can be removed either by hand or by using a shop-vacuum. Insecticide applications against BMSB are NOT recommended indoors.

As BMSB disperses to new habitats, its overwintering nuisance behavior is often noticeable early and can assist in monitoring its distribution. Suspected populations should be reported and brought to your local county extension office for identification and reporting.