First-of-the-season trap catches of brown marmorated stink bugs have been seen the last few days in half of the 10 trapping sites in east Michigan orchards, with some fruit feeding damage as well.

Earlier this summer, MSU set up a network of more than 80 trapping sites in orchards and vegetable farms across the state, with 10 sites here in east Michigan. Sites in our region where the brown marmorated stink bug trap catch occurred in the last few days were in Genesee, Lenawee, Oakland and Washtenaw counties. We have one additional site in Genesee County that maintains a set of traps; they have been catching a small number of brown marmorated stink bugs since early August.

I have also seen some limited feeding damage in apples over the last week, mainly in Gala and Golden Delicious. This feeding damage most likely occurred in the last two to three weeks. Damage has been mistaken for bitter pit symptoms, which is related to a calcium disorder. 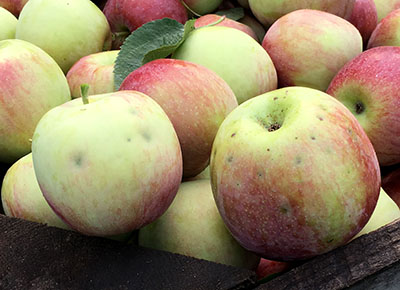 As you harvest apples and grade fruit, you need to be on the lookout for insects and damaged fruit. Brown marmorated stink bugs are rather allusive, so finding them on fruit or in trees may be difficult. Contact me at tritten@msu.edu, 810-244-8555 (office) or 810-516-3800 (cell) if you find brown marmorated stink bugs or need help sorting out damaged fruit or bitter pit damage.