An identification guide for brown marmorated stink bugs is now available online, as well as an extensive list of host plants.

Brown marmorated stink bugs are an exotic pest of fruits, vegetables, soybeans, field corn and many ornamental plants. They were first discovered in Michigan in 2010 and, as of April 1, 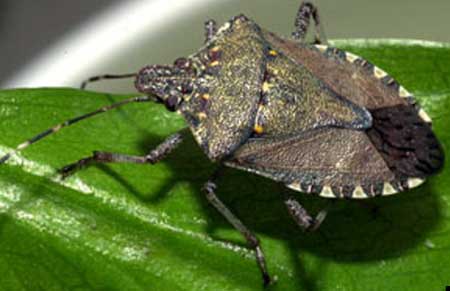 2013, have been confirmed in nine counties by Howard Russell, entomologist at Michigan State University Diagnostic Services. So far, its presence in Michigan has been primarily as a nuisance pest in homes rather than as an agricultural pest.

According to Michigan State University Extension, an excellent resource for identifying stinkbugs of economic importance, including brown marmorated stink bugs, was published as a field guide by Virginia Tech several years ago. The 40-page guide, titled “Field Guide to Stink Bugs of Agricultural Importance in the Upper Southern Region and Mid-Atlantic States” is now available for download. The guide has good photos and descriptions of egg nymph and adult stages for economically important species, less common species and beneficial species, along with photos of feeding damage on several economic crops.

I have been asked which plants are reported hosts for brown marmorated stink bugs, and it has been difficult to find this information. What I find most often is a list of a dozen or so common economic crops and a vague reference to about 300 hosts. I finally came across a more complete list (still not 300) in a presentation called “The Brown Marmorated Stink Bug (BMSB) in Oregon,” by Helmuth Rogg of the Oregon Department of Agriculture. The list (Fig. 1) shows some 128 reported hosts for brown marmorated stink bugs including a number of weeds as well as economic and ornamental plants. Tree of Heaven, Ailanthus altissimus, has been reported as a host, although it is missing from this list.