Mole damage can look different when it is seen weeks or months after it has happened. This can be confusing to homeowners because they are not sure what they are viewing. Mole damage always has a surge in fall because moles are busy with their season-ending stuff-a-thon. The first page of Mother’ Nature’s “Animal Playbook” indicates animals that pick up the most body fat have a better chance of being around in spring. Sadly, that page is also in the “Human Playbook” as we stuff ourselves as the weather gets colder.

Michigan lawns have two different types of moles that feed on earthworms, soil insects and grubs: eastern moles and star-nosed moles. Eighty percent of a mole’s diet is earthworms, and the stories about grubs being their only food are just wrong. Moles are native to Michigan and long before Japanese beetles and European chafers invaded, moles had a very good, nourishing diet. These common alien grubs only added another dish to an already impressive menu. Michigan State University Extension horticulture educators and Master Gardener hotlines talk to people about mole damage every spring, summer and fall to give them this information.

Star-nosed moles work deep in the ground with tunnels 6-12 inches below ground. All that is seen is the occasional vent hole that appears and a loose pile of soil. There are no tunnels, just what appears as a mini-soil volcano.

Eastern moles work just below the surface of the soil, just about the depth of grass roots. Because their tunnels are so close to the surface, two different kinds of tunnels are apparent. There are raised ridges that are relatively straight or gently curved. Think of these as the mole expressway to get from one area to another. Moles use these for an extended period of time like months or years. Eastern moles will also dig side tunnels off the expressway as hunting and feeding expeditions. They make a raised trail that is serpentine or intensively curved. These tunnels explore more territory in search of earthworms or soil insects. If a grub is found, it’s just a bonus. These can be thought of as mole side roads. The side roads are only used once. 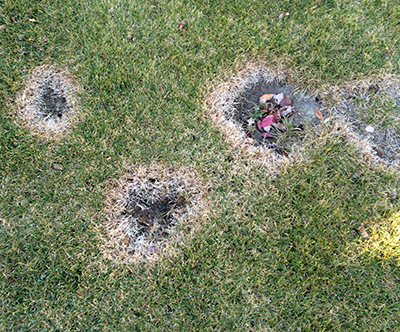 When tunnels have been dug within the last week or so, those ridges will be visible enough to follow and walk on. The tunnels that pop up in 24 hours are the expressways. That’s why using a lawn roller to flatten all the tunnels in the lawn will result in almost all of them staying flat. Only the currently-used expressways will pop up. If you are setting traps or placing bait, this should be done on the mole expressway. This tunnel has the best opportunity of mole activity.

If the tunnels are old, they may not be as easy to recognize. Rains or just gravity have caused some portions of tunnels to slump. The grass often looks good in those areas. Other areas that are still raised will show dead grass if the damage is recent. If it has happened weeks before, the dead grass dried up and blew away like tiny tumbleweeds, leaving bare soil.

Once it is past mid-September, the time to put down grass seed for this year has passed. Little, lonely grass seeds often become bird and rodent chow in winter. If reseeding, wait until mid-April to mid-May when conditions are best for grass seed germination.

What’s the difference between Roundup and Roundup For Lawns?

Does a dormant lawn need to be treated for grubs?