The Michigan Farm to Institution Network and its institutional purchasing campaign Cultivate Michigan recently held a tour in northern Michigan to learn about dried and frozen cherries, which will soon debut as the 2016 featured food for winter. Though they can be purchased year-round in their dried and frozen forms, all cherries in Michigan are harvested in July and August. Cherries fall into two general categories: tart and sweet. Michigan is the top state for tart cherry growing, with nearly 75 percent of the entire country’s production. Nearly all (98 percent) of the tart cherries grown in the U.S. are one variety, Montmorency, and they are primarily processed by drying, freezing, or canning. Michigan also produces sweet cherries, which are generally consumed fresh, though some are frozen or canned as well. One of the most surprising things that participants learned on the tour was that maraschino cherries are made with Yellow Gold cherries, which are a light sweet yellow variety that is dyed red or green and preserved in syrup. 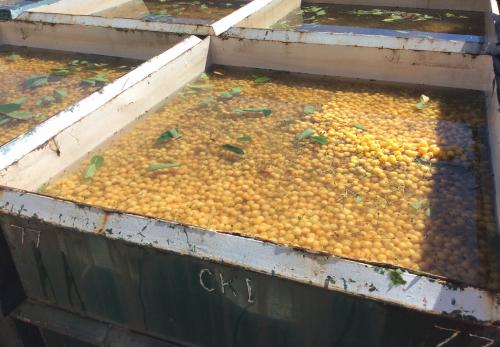 The tour was held in July so that participants could observe the harvest first-hand. The tour was sponsored by the Cherry Marketing Institute and lunch was sponsored by the MSU Product Center. Seven farm to institution stakeholders attended the tour to learn more about the supply chain and purchasing options for Michigan dried and frozen cherries. They were joined by three Michigan State University Extension Educators and Phil Korson, President of the Cherry Marketing Institute.

The first stop on the tour was Cherry Bay Orchards in Suttons Bay to meet with Don Gregory, who has been growing cherries there since the early 1970s. While enjoying samples of tart cherry juice and cookies made with dried tart cherries, participants learned how cherry farming is a long term commitment and investment for growers. Don shared that cherry trees are not harvested until five years after they are planted, and that it takes about four years after the first harvest to pay off the operating cost of that tree. After a brief introduction to the farm and its food safety practices, Don led the group into the orchard to watch the harvesting equipment in operation. He explained how quickly the cherry season progresses: only 60 days from bloom to harvest. 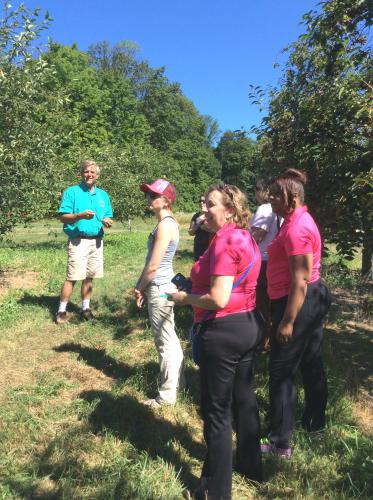 Cherries are harvested into water to protect the fruit. Machines vigorously, yet gently, shake the trees to loosen the cherries. Rather than simply back and forth, the machines shake the cherry trees in the shape of a star to ensure that they impact all of the stems at just the right angle to release the fruit. The cherries land on an angled canvas tarp and drop into large tanks that hold 1,000 pounds of cherries and 1,000 pounds of water. After harvest, the fruit remains in the tanks for several hours while the water is constantly being flushed out and exchanged for cool water. This process removes the field heat from the cherries.

After departing the orchard, participants traveled to the Northwest Michigan Horticultural Research Station in Traverse City to have lunch, meet with industry representatives, and learn about the latest research on growing cherries. The research station is owned by a collective of cherry growers in the region and is operated MSU AgBioResearch. Participants took a wagon ride around the facility with Farm Manager Bill Klein, who spoke to the group about current studies looking at cover crops for orchards, plants that attract native cherry pollinators, new varieties of cherries, new and emerging pest issues and diseases. 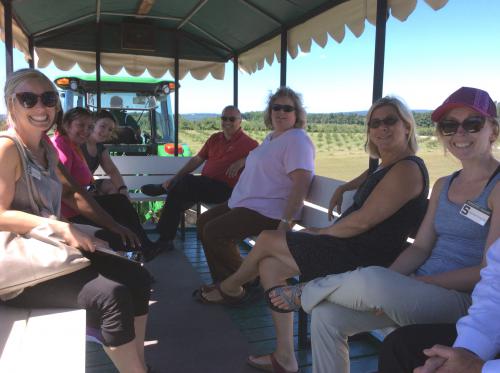 The day concluded with a tour of the Shoreline Fruit processing facility in Williamsburg to learn about the process for making dried cherries. Shoreline Fruit is a grower-owned processing and marketing company. Cherry marketing looks much different today than it did in the past. Anticipating changes in the consumer market, the cherry industry intentionally transitioned its tart cherry marketing efforts away from dessert products and into the health food market with products such as dried cherries and tart cherry juice. At the processing plant, the fruit gets washed, sorted and pitted. Then it is either frozen for use as a frozen or dried cherry product, or canned. Many participants were surprised to learn that dried cherries are made from frozen cherries, which are then thawed, infused with syrup and finally processed in a drier. Before departing for the day, participants had the opportunity to get a guided behind-the-scenes tour of the processing plant.