Child of the ice age: The Clinton River

The Clinton River watershed was formed over 20,000 years ago from the expansion and recession of huge glaciers through the area. Today, the Great Lakes Education Program gives citizens the opportunity to learn about this glacially-formed river.

Historically, the Clinton River was formed during the most recent ice age when 2-3 mile thick glaciers covered the land as far south as Cincinnati, Ohio. The terrain of the Clinton River watershed formed as the ice expanded and receded depositing sediment called till. The hills throughout Rochester and Auburn Hills are glacial formations called moraines. A moraine develops when the ice flow stops its recession and low-lying hills of assorted sediment are left.

As the ice receded, rivers began to form from the melting ice. However, the edge of the remaining glacier forced the Clinton River to initially flow to the southwest. It wasn’t until the glacier edge receded back beyond the Birmingham Moraine that the river was able to adopt its current flow direction from west and northwest in Oakland County to the southeast into Lake St. Clair, Macomb County’s east border.

As the glaciers continued to recede, a number of lakes formed in front of the ice. A flat lake plain was created extending from southeast Oakland County through Wayne and Macomb Counties.

This ice age development is what has given the Clinton River watershed its diverse and unique characteristics. It consists of two unique topographical areas: the western areas in Oakland County have more hills and steeper channels while the eastern area in Macomb County has a flat land area. This has influenced the land use in the watershed with homes and buildings on the hilly areas and agriculture and manufacturing on the flat terrain. 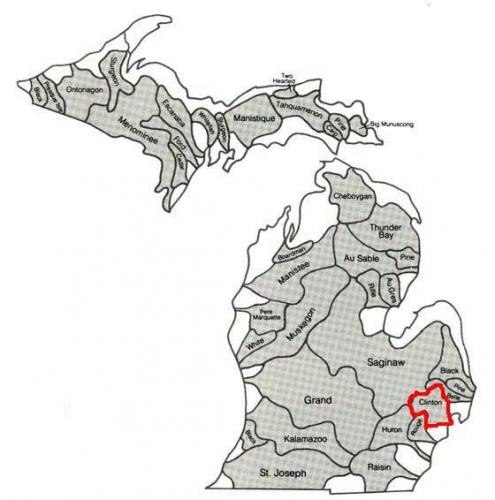 This diagram shows the major watersheds in Michigan. The Clinton River watershed is outlined in red.

Modern aspects of the watershed are no less impressive. The watershed covers 760 square miles with 1.6 million people in 56 communities and 4 counties within those boundaries. During its history, the river has been known by four different names: The Nottawasippee, meaning "like rattlesnakes"; the Huron River of St. Clair; the River Huron; and the Clinton River. It was also part of the ill-fated Clinton-Kalamazoo Canal which was an attempt to connect Lake St. Clair and Lake Michigan to improve shipping across the state.

The Clinton River travels 80 miles from the headwaters in Oakland County’s Springfield Twp. to Lake St Clair in Macomb County’s Harrison Twp. It has a drop in elevation from headwaters to river mouth of 465 feet.

It has had the distinction of once being identified as most polluted river in U.S. and is currently a poster child for river restoration. The Clinton River boasts a premier trout stream, kayaking and canoeing.

Summer 2014 in the Great Lakes – Shiver, sizzle or pretty average?