Chilling injury on cuttings: What to look for

Extremely cold temperatures have threatened safe shipment of cuttings and plugs to greenhouse growers. Learn what to look for when chilling injury is suspected.

The lengthy cold snap that has affected Michigan the past three weeks (as of Jan. 28, 2014) shows little sign of improving in the next few weeks. With temperatures at night well below zero and daytime highs in the mid–teens, greenhouse growers who have started production are feeling frustrated.

This is young plant production time when many growers receive un-rooted cuttings, liners and plugs for spring production. Shippers of cuttings are delaying deliveries because the tender cuttings cannot withstand the frigid temperatures. Some arrivals have been frozen to the point that one grower said “When they’re that cold, they’re dead, and dead is dead, so don’t attempt to plant them out to see if they will root.” Also when opening the bag, smell the cuttings; if they have a compost-like smell, they probably are starting to decay from the cold temperature damage. Michigan State University Extension recommends growers who receive cold-damaged plant material contact the vendor right away and make a damage claim.

Sometimes you can immediately determine if the plant material is damaged; other times, you may want to leave the box inside over night at 55-60 degrees Fahrenheit and recheck the plants the next day and look for damage. If you do decide to put them out on a bench to root, flag the group so that if they do not grow as expected, it was because of the cold temperature damage during transit.

The symptoms of acute freezing or chilling damage tend to be similar among crops: leaves and stems look “water-soaked” and become translucent. The damage usually shows up within a few hours after exposure to warmer temperatures.

In a recent discussion I had with John Dole from the Department of Horticultural Science at North Carolina State University he said, “Cuttings often look OK and chilling damage appears later. A fairly broad range of symptoms can occur, including water soaking, apex death, leaf abscission, rotting and failure to root. The latter symptom can be especially problematic as it can be caused by many other problems, such as too high or low prop temperature, over-misting, old age, etc. The lack of rooting I usually see is with woodier and tropical plants, such as hibiscus. Generally, the softer annuals tend to just rot or drop their leaves.”

Here is a partial list of plant material that is chilling-sensitive, meaning they will show injury even if they are not taken down to the 32 F freezing point.

According to Jim Faust at Clemson University, a grower should pay close attention to cuttings on the outermost portion of the bags. These may have damaged tissue, especially the leaf tips and immature leaves, and may have black spots or become entirely black. Impatiens will exhibit leaf abscission

Below are a few photos to show the symptoms mentioned above that you can see as water-soaking, leaf browning and tip death. 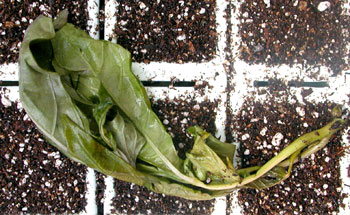 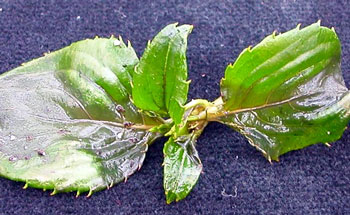 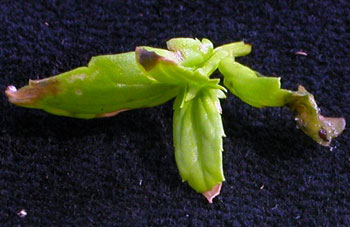 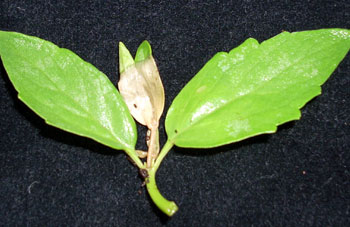 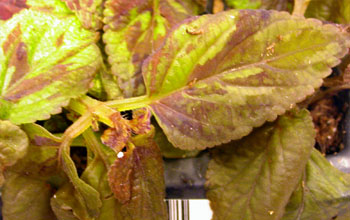 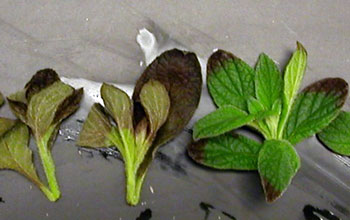 Check your cuttings carefully while the extreme cold weather continues. Also, since some young plant growers are not shipping on time, your schedule for the product will also probably be off, so you will have to adjust your finish times.