China’s dairy industry: Bumps and bruises on the fast track

The United States leads the world in top producer of cow’s milk, but India and China are catching up coming in at second and third.

The U.S. is the world’s top producer of cow’s milk, but it may be a bit of a surprise to know who rounds out the top three: India and China. China’s milk production took off around the year 2000. By 2007, they had more than quadrupled their milk production from 9,120 U.S. tons to 38,858 tons per year. But then came 2008, a pivotal point for dairy in China, the year of the melamine scandal.

It is reported, by the Institute for Agriculture and Trade Policy, that melamine, an industrial chemical, was added to substandard milk in order to artificially increase the protein content. It sickened tens of thousands of children and resulted in at least six deaths. China’s dairy industry stalled. Production was down sharply in 2008. Since then, production growth has been moderate, increasing about three to six percent per year. By 2014, production finally was back to the 2007 level.

I had the opportunity to be in China in October 2015 to speak at the China Dairy Conference hosted by the University of Minnesota College of Veterinary Medicine and the NMC (National Mastitis Council). The conference, in its second year, was held in Hohhot in Inner Mongolia. It drew more than 500 participants and over 70 exhibitors. Being in China for a week does not qualify me to speak authoritatively on the industry there, but it provided me some insight concerning China’s dairy industry and data is available that helps to tell the story.

As a result of the melamine scandal, China’s government has taken a more active role in the dairy industry, encouraging the transition from small farms to large integrated operations owned by the milk processors. The belief is that this will ensure food safety.

As recently as 2006, over 80 percent of the milk produced in China was on farms with fewer than ten cows. Around 2002, village milking centers were developed where owners of cows walked them to be milked. I spoke with a young woman who worked for the conference organizing company; her aunt still had three cows that she milked at a milking center.

Prior to this, agents would go door to door to buy milk. The melamine scandal was blamed on small producers, but information since that time has implicated the traders and processors who handled that milk. 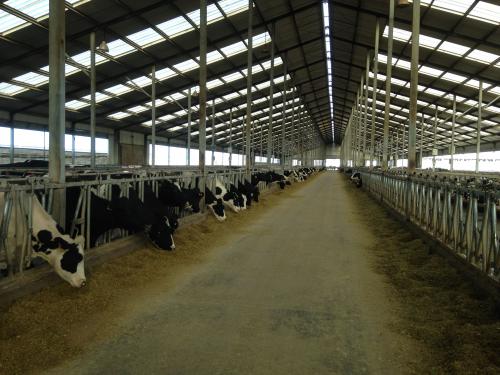 Several conference speakers and I had the opportunity to tour a large farm that milks 4500 cows, owned by one of the largest processors in the country. That milk company and several other domestic companies own and operate farms totaling 25,000-45,000 cows each. In addition, foreign companies such as Fonterra and Nestle own and operate farms in China as well as process and market the milk from them.

In some sense, setting up large-scale farms is easy. Thus, it is not unusual to find farms with more than 10,000 cows in parts of China. There are constraints to dairy farm growth including forage production. In 2014, according to Alfalfa and Forage News, China imported almost 800,000 tons of alfalfa from the U.S., enough to feed 10,000 lbs. per year to 160,000 cows. Feeding the larger herds will take more forage and grain production or more imports.

However, as any dairyman or dairywoman knows, managing the details is what makes or breaks a dairy farm of any size. In my estimation, that is the current Achilles heel of China’s dairy industry.

On the farm we visited, we saw cows in headlocks with no action being taken in the pen, leaving us to wonder how long they were locked up. The manager said only a half an hour, but clearly it was much longer. In addition, as we watched milking in the rotary parlor, we noticed little things that increased the risks of teat end damage, poor milk letdown and insufficient time for complete milking.

Some of these details will be learned. Improvements will be made. Performance will improve as both herd managers and employees develop additional skills. China has great potential to continue to grow its dairy industry but there is still the issue of ownership. It is an industry being built with dairy units that are part of a larger company.

The degree to which those companies are able to engage their employees, will likely determine their success. Integrated dairy companies will need to put a priority on developing employees to foster personal “ownership” by managers and workers. Engaged employees who take ownership for animal care and milk quality is a key ingredient to success of dairies in any part of the world. Watch for more stories published by Michigan State University Extension on the dairy industry in China.

Other articles on the dairy industry in China: