Christmas peppers in your home garden

I’m not sure if I have ever tried to pick a peck of pickled peppers, but I’ll bet Peter Piper never even heard of an “ornamental” pepper. If he could pick some now, there would be more than a peck of cultivars to choose from!

In an effort dating back 25 years, plant breeders started making strides towards producing peppers with fruits that are just as pleasing to the eye as to the palate. Breeding and testing a new cultivar that eventually makes it to our home gardens can take as many as 15 years. In the past two or three gardening seasons, the results have started to show up in garden centers and botanic gardens around the country according to Robert Griesbach, Research Geneticist of the Agricultural Research Service in Beltsville, Maryland.

Ornamental peppers really made their claim to fame at the turn of the century, long before the poinsettia became popular as an indoor holiday plant, says Griesbach. Potted, brilliantly colored “Christmas peppers” were very popular because they could take the cool, indoor home environment and yet last a long time. 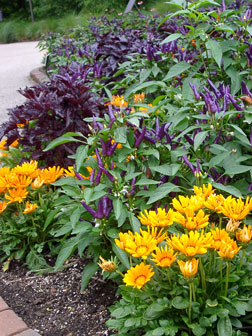 From a gardener’s standpoint, ornamental peppers are one of the most fruitful annuals one could plant, no pun intended. With little or no dead-heading, the peppers not only last, but get better looking on the plant throughout the season. Many of the cultivars chosen for superior ornamental quality have an intensely colored bloom which is followed by heavy fruit production. The fruits are often cone or cigar shaped like the traditional chili pepper but can also be round or even lumpy, like a miniature bell pepper.

The interesting thing is that as the fruit develops it slowly ripens, magically transforming as the color deepens. For instance, the Kent /MSU Extension office had a display last summer of a dwarf pepper with variegated leaves known as “Shu”. This tiny pepper plant produced one-inch fruits that began a pale yellow then transformed to purple and eventually brilliant red. Throughout the season, the plants were continually covered with peppers at all stages of ripening. With adequate fertility and a bit of supplemental water, these plants were both ornamental and somewhat entertaining. Once established in a container or the garden, pepper plants seem to take all kinds of abuse such as scorching hot sun.

At the Chicago Botanic Gardens in the summer of 2007, a display of a deep purple pepper known as ‘Masquerade’ was complimented by the purple foliage of ornamental basil and the brilliant, and also heat tolerant blooms of Gazania. Another cultivar, ‘Chilly-Chili’ has uniform, brightly colored peppers similar in size and shape to a chili. It produces heavy loads of the showy fruits in the center of the plant and never gets too tall. This plant is excellent used as a border, (did I mention color?) in combination with other bright colored annuals or in containers. By the end of the season, most of the subtle yellow peppers will have turned a brilliant scarlet. I love the idea of not needing dead-heading.

Peppers of the Caribbean

The 2006 All American Selection (AAS) winner ‘Black Pearl’ is the latest eye-catching cultivar to be developed and released by the AAS. To receive the AAS award, a cultivar must show “superior garden performance.” I can attest to the outstanding performance of ‘Black Pearl’, which became a pirate’s treasure in our MSU Extension Grand Ideas Garden annual trial. This was the most asked about plant on display last season. With deeply colored purple foliage topped by half-inch, perfectly round, black fruits, the plants were just as beautiful in early November when we removed them as they were at planting time. As the season got hotter and hotter, some of our other annuals took a dive in performance, but the all the peppers just got better. They were so amazing that some people thought they were fake.

If the names ‘Tangerine Dream’, ‘Holiday Flame’ or ‘Red Misssile’ sound intriguing, you can look forward to yet another peck of ornamental peppers landing in a garden center near you in the next few years. According to Griesbach, the future for development and release of new ornamental peppers looks bright. Plant breeding to him is kind of like assembling a Mr. Potato Head doll. He looks for outstanding fruit, to combine with cool foliage and interesting habit. This next season, Griesbach says we can look forward to a ground cover pepper with black foliage. If it is anything like the ‘Black Pearl,’ I could quickly become a pirate gardener! 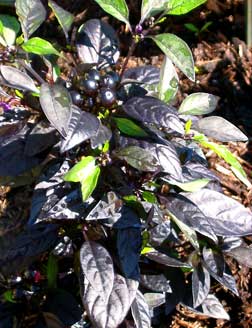