In a recent MSU study, the boiling method was found to be most effective when sampling blueberries to detect contamination of spotted wing Drosophila.

Spotted wing Drosophila is a new, invasive insect pest of fruit crops that was first detected in Michigan in September 2010. At the time of this article (July 2011), there have been no detections of spotted wing Drosophila in traps in Michigan during 2011. Fields are being monitored carefully and the fruit industries are preparing multiple approaches to ensure that there is no economic impact of this insect. One important component of a spotted wing Drosophila management plan is the ability of processors and buyers to detect larvae and pupae in fruit samples so that infested fruit is not marketed. This study compared the effectiveness of four sampling methods for detecting spotted wing Drosophila larvae and pupae in fruit, including a boil method currently used to detect blueberry maggot infestation of blueberries in the eastern United States.

Organic, store-bought blueberry fruit were exposed for 12 days to spotted wing Drosophila adult flies, using insects from a colony maintained at Michigan State University. Adult flies were anaesthetized with CO2 and removed from the containers, and then the berries were mixed and sorted into 100 berry samples. Sixteen replicates were set up, with each experimental unit consisting of 100 berries. These were sampled using one of the following four methods.

The boil method was the most effective for detecting larvae in berries, providing significantly greater ability to detect small larvae and being two to three times more effective than the sugar or salt methods for detecting large spotted wing Drosophila larvae. Even though the manual sorting was done using a microscope and careful examination of the berries, it failed to detect small larvae and the fruit pulp hampered detection of the large larvae and pupae. The sugar method was effective for detecting pupae because they all floated on the liquid surface, but the cloudy liquid obscured some of the larvae, and smaller larvae were not detected. The salt method was the least effective, detecting the lowest number of each stage of spotted wing Drosophila. 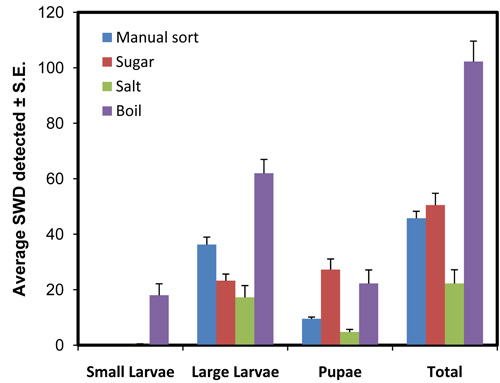 From the results of this study, the boil method is recommended for use by Michigan producers and processors that are sampling fruit to detect contamination by this insect. This method provided high sensitivity to large and small larvae, gave rapid results and could be implemented at a receiving station to determine the infestation status of berries. Further research is needed to determine the sensitivity of this method for low infestation situations and to optimize the sampling to ensure the highest possibility of detecting berries infested with spotted wing Drosophila.

Thanks to Katie O’Donnell and Noel Hahn for technical assistance. Funding provided by Project GREEEN.

Dr. Isaacs’s work is funded in part by MSU’s AgBioResearch.