Delphinella shoot blight has been found to be causing needles and shoots to turn brown on Concolor fir.

We have been receiving a number of calls from growers as well as homeowners that new needles and entire new shoots on Concolor fir suddenly turned brown in June. At first appearance this seems that it could have been caused by frost. However, other plants in the area did not show frost damage. We suspected this may be caused by Delphinella shoot blight (Delphinella abietis).

As with all pests, it is important to identify the disease or other causes to determine the best control method. Samples were collected and sent to Michigan State University Diagnostic Services for further testing to isolate and identify the causal agent. Delphinella grows very slowly and often other fungi can overtake the culture before it can be identified. So, in addition, we sent samples to Dr. Gary Chastagner of Washington State University (WSU) for DNA analysis. Recent results from WSU confirmed Delphinella abietis. 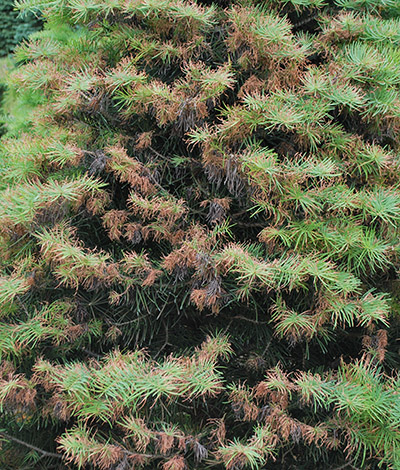 New needles and shoots that have browned, shriveled and wilted. In the event that the new growth has expanded, symptoms can be limited to the needles with minimal shoot dieback.

Currently, Concolor fir is the only species we have found Delphinella on in Michigan. However, reports in the literature have found it to occur on these conifer species grown for Christmas trees:

If a small number of trees are infected, MSU Extension suggests removing those trees to reduce the potential reservoirs of inoculum. Make modifications to your site that allow needles to dry and reduce the chance of infection. To help manage these needlecast diseases, consider better air drainage, greater planting distance between trees and better site selection.

Applications of chlorothalonil during shoot elongation may provide effective control of this disease. Since infections can occur as soon as the new grow emerges from the buds, timing of your fungicide sprays is critical. Also, the new growth of Concolor fir is very succulent. When high-pressure sprayers are used or conditions do not favor rapid drying of the spray on the needles, applications of fungicides can result in damage. Damage symptoms can appear as needle yellowing and the development of necrotic spots on the needles.