Conservation costs can be higher than bargained for

Sweeping policies that reward people in environmentally sensitive areas for returning their farmlands to nature have been lauded as ecological triumphs. But a new Michigan State University study shows that over time some participants may become conservation martyrs.

Payments for ecosystem services (PES) programs have been global darlings for decades, tapping into the combined benefits of restoring forests and wildlife habitats, while also providing compensation to farmers and freeing them for new jobs that facilitate socio-economic development.

And in many cases, both sides have benefited. But in this week’s Science Advances, researchers for the first time have dug deeper than the obvious win-win pathways, revealing that as time passes, some people who signed up for these payment for ecosystem services plans get stuck with deals that may support sustainability, but aren’t sustainable for them.

“Payments for ecosystems services is a powerful tool to engage local people in conservation,” said Jianguo “Jack” Liu, a co-author and director of MSU’s Center for Systems Integration and Sustainability. “But it also requires holistic examination, because so many factors weigh on conservation success. This is particularly important for achieving the United Nations’ Sustainable Development Goals.” 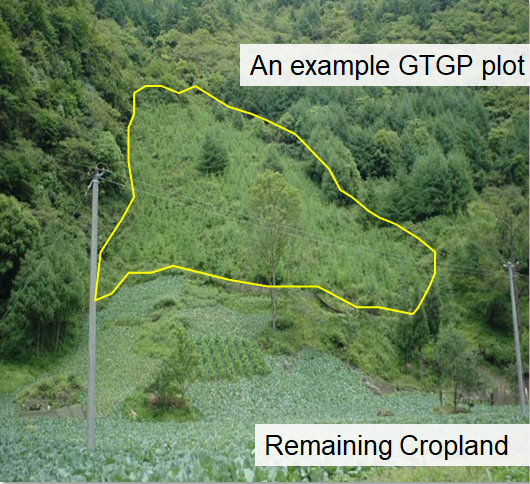 southwestern China’s Wolong Nature Reserve were faring since they started taking payments under two of the country’s PES programs. The Grain-to-Green Program, one of the world’s largest PES programs, was created in 2000 to address the rapid degradation of ecosystems including giant panda habitat. By 2010, around 15 million hectares of farmland were returned to forests or grasslands. The local Grain-to-Bamboo Program, started in 2002, supported growing bamboo on cropland to feed pandas in captivity.

Wolong is home to about 4,900 local residents, most of whom work in crop farming and livestock husbandry.

Hongbo noted that on the surface, the two PES programs had great appeal for Wolong residents. Farming, especially in the steep land of Wolong, is hard work. The programs would free participating families up to seek work elsewhere. Tourism is big business in Wolong, which is home to about 10 percent of the world’s beloved, threatened panda bears, and is rebuilding panda-centric tourism after a catastrophic earthquake. It also seems feasible for people to migrate to cities where jobs were plentiful.

And, typically these sorts of programs were established and evaluated in straightforward economic terms based on circumstances at the beginning of the programs. Between 2000 and 2003, households in Wolong enrolled an average of 66 percent of their cropland into the programs.

Yet the prospective new careers weren’t the success many had hoped for, Hongbo said, and the reasons didn’t immediately show up on economic spreadsheets. Tourism, as a previous MSU study showed, tended to be dominated by outside operators, with little opportunity for Wolong residents to profit. Leaving the area to work in cities also was fraught with difficulties, including workers often face a reduction in quality health insurance and have difficulty securing a good education for their children, as well as being at risk for increased stress and depression.

Tourism work and labor migration spurred by these PES programs have the potential to increase income, but such positive effects are far from enough to fill the gap between the programs’ payment and associated opportunity costs. Income from tourism work and labor migration induced by the Grain-to-Bamboo Program offset only about 18.3 percent of the income lost to forgone crop production. In the case of the GTGP, these positive effects offset an even smaller portion – 11 percent – of lost crop production.

In other words, the Wolong households would have been financially better off not participating in the programs.

“We can now see the payments were oversimplified in these cases,” Yang said. “It’s a common issue in payment for ecosystem services programs, that the focus is on the current circumstances. We’re showing that it’s also important to consider opportunity costs at the beginning, and be prepared to monitor and reexamine all the costs and benefits over time.”

The study, “Revealing pathways from payments for ecosystem services to socioeconomic outcomes,” points out new targets to tweak policy to better assure participants can thrive even as they sacrifice in the name of conservation.