Installation of irrigation systems has increased over the past decade, putting more acres under irrigation than we have ever had in the past. Typically, winter wheat is not irrigated in Michigan because we get more than enough rainfall each year. Winter wheat needs 18-20 inches of water to reach physiological maturity. In Michigan, we typically get 26-35 inches of rainfall annually (12.5 inches March through June) depending on location within the state. Wheat takes up the most water from jointing through grain fill.

As of May 20, 2021, 76.8% of Michigan was in category D1 Moderate Drought. Due do the dryness and the fact that the wheat crop has entered highest water use stages, several growers that have irrigation have asked about irrigating wheat. Usually there is no need to irrigate wheat except on loamy sand and sandy loam soils. Therefore, most wheat growers don’t have experience with how to irrigate wheat. 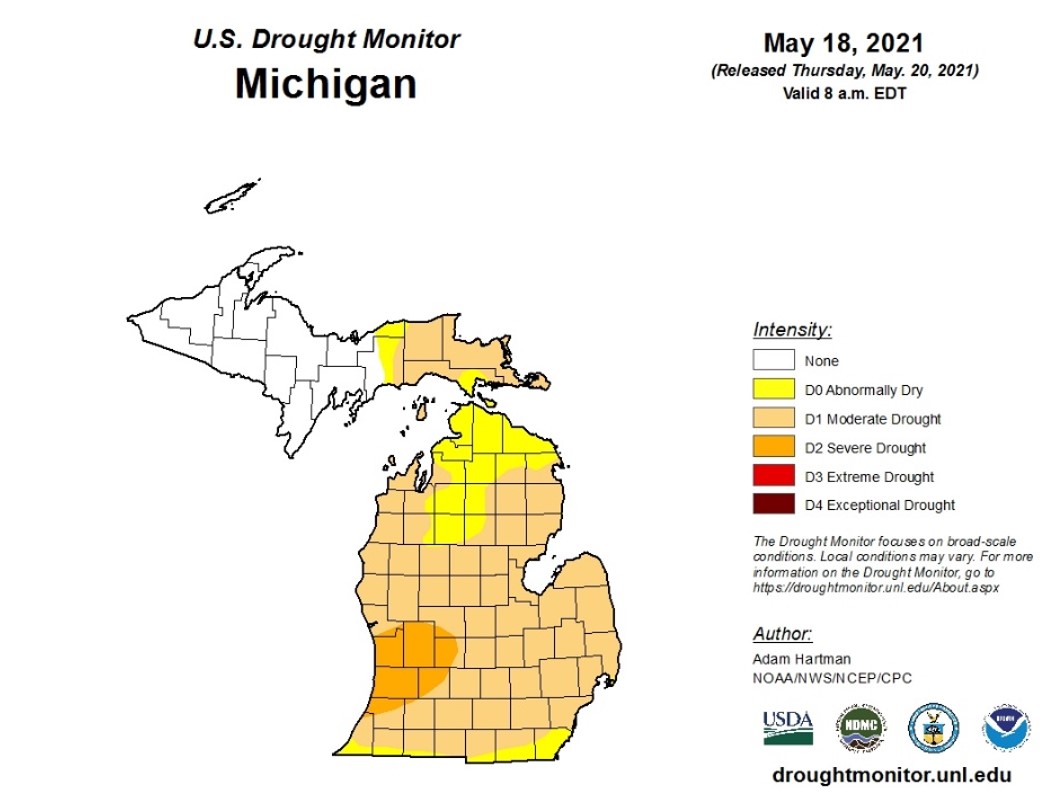 Irrigation scheduling is the term given to deciding how much and when to apply irrigation water. The over-arching principle in irrigation scheduling is to replace the water used by the plant for evaporation and transpiration (evapotranspiration or ET). The ET rate for crops is established by raising plants in a container of known volume on scales called weighing lysimeters that record reduction in the weight of the soil in the root zone as the crop uses water and as rainfall or irrigation increases the soil root zone weight.

The accompanying chart shows how wheat ET increases, peaks and declines as the crop matures and how crop water use increases as average daily temperatures increase.

While there may be lower incidences of leaf diseases and fusarium head blight (scab) in irrigated wheat in dry years, unanticipated rainfall following irrigation can lead to more disease challenges. Most of the fungal pathogens that impact wheat thrive when extended periods of leaf wetness or soil saturation occur. The most critical time for fusarium head blight infection is during flowering (Feekes growth stage 10.5.1), which, unfortunately, occurs during the period of the highest crop water usage.

Research sponsored by the Delaware Crop Improvement Association conducted from 2013-2016 showed that irrigation increased yields by 7-14% in three of the four years. There were only slight differences between the various irrigation strategies. However, researchers discovered a significant trend; adequate soil moisture levels must be maintained before flower and at levels high enough to support the crop through flowering and early grain fill.

If possible, develop an irrigation plan that will provide adequate soil moisture but avoid applying water two weeks prior and two weeks after flowering. This may be especially important if your irrigation system has the tendency to over-apply water to portions of the field, as may be the case with some cornering arm systems. These areas are usually confined to small arcs in the field but can provide valuable locations to scout for the detection of wheat disease problems.

If you must irrigate during the two-week periods prior to and after wheat flowering in order to meet water demands, scout regularly for diseases because applying irrigation water can increase the potential for leaf diseases. Be prepared to apply fungicides if wetter conditions occur following irrigation, particularly during flowering. There are excellent resources available on controlling wheat leaf diseases and fusarium head blight at the Michigan State University Extension Wheat Disease webpage.

There are several paper and computer systems available to help irrigators schedule irrigation applications. These tools are “checkbook type systems” that view the water in the soil root zone as your checking account. Rainfall or irrigation serve as deposits in your account and evapotranspiration is considered a withdrawal. Overviews of irrigation scheduling tools that are available in the Michigan area are available at the MSU Extension Irrigation website.

Irrigation to help get the crop started

Fall and winter drought could cause challenges in crops

Strategies for Efficient Irrigation Water Use