Control of pre- and post-harvest fruit rots in blueberries

With recent weather conditions, fruit rots in blueberries are a concern. Here are the control options to consider.

Currently, blueberries are looking and tasting good! Mummy berry is showing up in some varieties like Bluecrop and Rancocas and causing browning and shriveling of fruit (Photo 1). While Bluecrop is considered moderately resistant to mummy berry, it seems to show more mummy berry than usual this year. In years with an early flush of mummy berry apothecia like this year, earlier-blooming varieties may actually be relatively more susceptible than later varieties because of timing of shoot strikes in the Bluecrop itself or nearby later varieties like Jersey. Good pollinating weather and many bees and mosquitos will also lead to more “efficient” spore dispersal, resulting in a high fruit infection-to-shoot strike ratio. 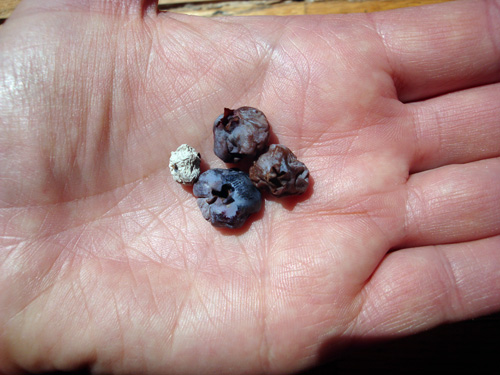 To confirm that browning of berries is caused by mummy berry and not by heat scalding or other problem, cut them open to see the white fungal growth filling the carpels (Photo 2). In some cases, only a few of the carpels are infected, which leads to uneven mummification. Mummies are also pretty tough and may feel rubbery before they completely dry done. Most mummies are already on the ground, but some are still present in the clusters. 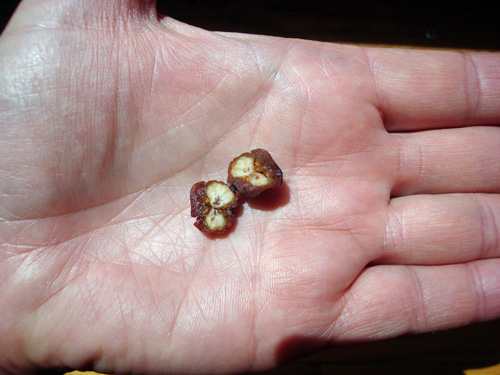 Photo 2. To determine whether berry browning is caused by mummy berry, cut the fruit
open and observe white fungal growth inside carpels. Sometimes only one or a few
carpels are infected.

Other problems noticed in the field are cranberry fruit worm tunneling in and webbing berries together, reddish or green patches on fruit due to feeding by Putnam scale (Photo 3), bird feeding pecks, and what appears to be hail damage to some berries (Photo 4). In the latter cases, there is a corky layer under the papery skin of the berry. Heat scalding may also occur and leave berries brown and soft (Photo 5). Any softening and berry collapse with a visible hole or maggot in the berry may be blueberry maggot or spotted wing Drosophila infestation. No evidence of leaf rust has been seen yet and infection is probably less likely under hot and dry conditions but careful scouting is recommended. As growers are gearing up mechanical harvesters, adjust settings if possible to reduce damage to canes and apply a fungicide immediately after mechanical harvesting to protect wounded canes if Phomopsis has been a problem and rainy weather is in the forecast. 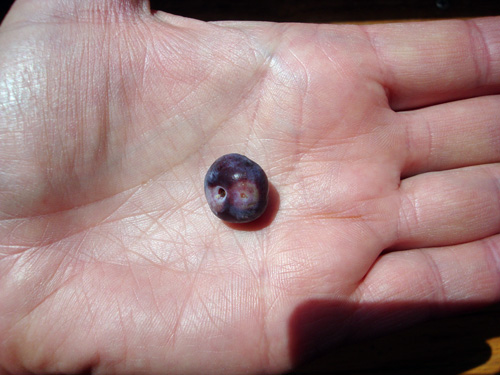 Photo 3. Poor coloring of areas on berries due to feeding by scale insects. 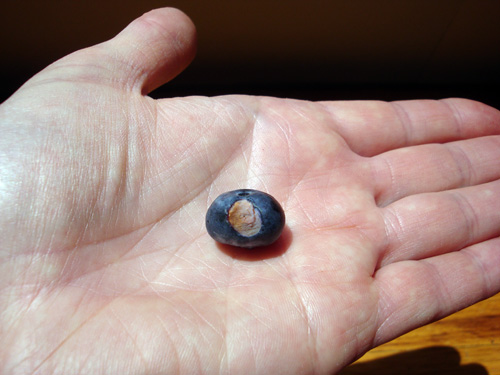 Photo 4. Fruit damage of undetermined cause, may be related to hail or insect injury. 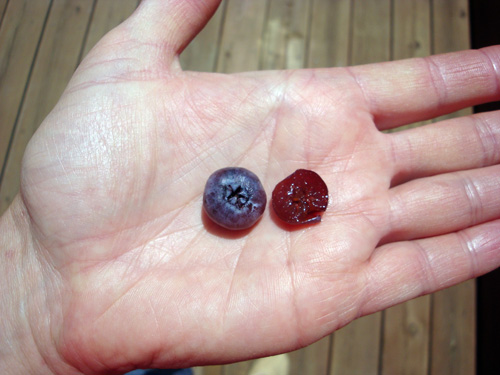 Photo 5. Browning and softening of berry which may be due to sun-scalding. When cutting
the berry open, there is no evidence of fungus or insect larvae.

With the warm and humid weather, fruit rots in blueberries are a concern, particularly anthracnose fruit rot (Colletotrichum acutatum). Alternaria fruit rot (Alternaria spp.) may also be a problem. Currently, anthracnose fruit rot can be seen in overripe berries in some early-maturing varieties. Therefore, timely harvesting is an important control measure. Post-harvest rot can develop on berries that look fine at harvest, but carry fungal spores on them that can infect and develop in berries during processing and storage. Post-harvest infection is slowed down significantly by refrigerated storage, but will resume on the supermarket shelves and in consumer’s refrigerators, lowering fruit quality. Anthracnose fruit rot infections can also contribute to high microbial counts in frozen processed berries, leading to rejection of fruit lots by some buyers. Rapid cooling of harvested fruit is important in reducing post-harvest fruit rot incidence. If the first blue berries are starting to show rot, fungicide sprays can still limit new infections of adjacent healthy berries. Applications one to two weeks before the first harvest or even between harvests can still be beneficial in preventing these late infections. The Enviro-weather anthracnose fruit rot infection model is still useful to recognize high disease pressure conditions, particularly for fruit that is still green.

Examples of fungicides that can be used during fruit development and ripening are discussed below.

The strobilurins (Abound, Cabrio, Pristine) are all very effective against anthracnose, with Pristine having the most broad-spectrum activity since it contains two different active ingredients. However, it is also the most expensive of the three. Pristine also has excellent activity against Phomopsis, while Cabrio has good and Abound fair activity against this disease. All are supposed to have moderate to good activity against Alternaria fruit rot and distribute well over the fruit surface since they are locally systemic. Do not use strobilurins more than three times per season and preferably no more than twice to reduce the risk of fungicide resistance development.

Switch (cyprodinil and fludioxonil) also has systemic properties and provides good to excellent simultaneous control of anthracnose, Alternaria and Botrytis fruit rots. Thus, it may be a good choice if several fruit rots are a concern.

Captevate (captan and fenhexamid) at the high rate will provide good control of anthracnose as well as Botrytis fruit rot, but this disease tends to be less common in Michigan and is more of a concern during cool, wet seasons.

Aliette (fosetyl-Al) is a highly systemic fungicide that provides good control of anthracnose, Alternaria fruit rot and Phomopsis. Less expensive alternatives to Aliette are Phostrol and ProPhyt. Be careful when spraying ProPhyt or Phostrol in a tank-mix with adjuvants or foliar fertilizers, as burning of leaves can ensue. This appears to be a particular risk when plants are heat-stressed or when foliage stays wet for more than six hours.

If the weather is relatively dry, a Captan/Captec spray alone may suffice for fruit rot control. Ziram is more effective at the 4-lb than 3-lb rate, but not particularly strong. Omega and Quilt Xcel are new fungicides with broad-spectrum activity, including against fruit rots, but both have a 30-day pre-harvest interval, so cannot be used at this time.