Plum growers need to keep on top of black knot, a disfiguring disease that can quickly destroy a tree.

Black knot (Apiosporina morbosa), is a striking disease and a major disease of plum trees in Michigan. Black knot appears on the woody parts of the tree including twigs, limbs and sometimes the trunks. Black knot attacks plums, wild cherries and some ornamental cherries. Cultivated sweet and sour cherry trees are seldom attacked in Michigan. Black knot is found throughout Michigan in commercial and home orchards and in wild plum and cherry thickets.

The common name “black knot” describes the main symptom of the disease. The initial symptoms are small, light brown swellings at the base of leaves, on the fruit spurs and terminal shoots. These swellings appear the year after infection. The swellings enlarge and develop an olive-green color. The green color disappears and the knots become black and hard. The knots vary in size, location and shape. Over time they coalesce to form larger knots on the branch. The knots are attractive to wood boring insects. 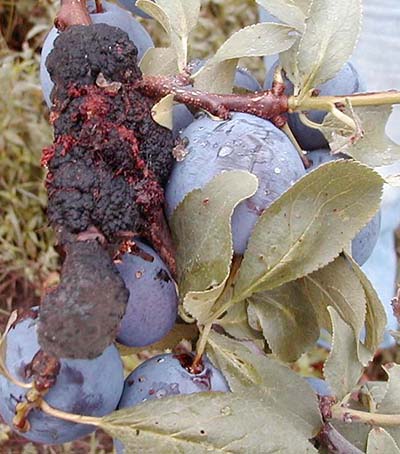 Black knot on Stanley prune. This knot is infested with American plum borer, which is the cause of the gummosis on this knot.

The black knot fungus infects new shoot growth and infections can occur from the green cluster stage of early bud development in the spring, until shoot growth ceases in June. At green cluster, the terminal and lateral leaf buds show 0.25-0.5 inch of new growth and the blossom buds are exposed but tightly packed. 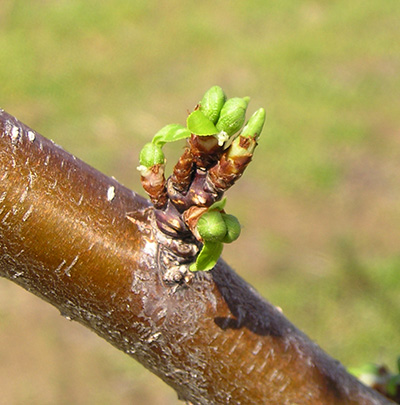 Rains and temperatures above 60 degrees Fahrenheit are necessary for infection. After infection, the fungus grows very slowly. A light brown swelling develops at the infection site later that year or the following season. The swelling turns olive green and produces spores within one to two years after infection. Fungal fruiting bodies develop on the surface of the knot and spores are mature when tree growth resumes in the spring.

During rainy weather, spores are discharged into the air and carried to the new growth. If the green tissue remains wet long enough, infection may occur. Spore discharge occurs from the prebloom stage to two or three weeks after bloom. Spore discharge can continue through early June. Later in the growing season, the knots expands. New masses of spores are produced every year. 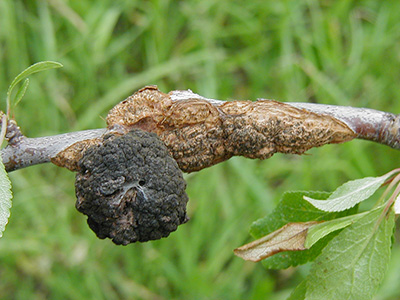 This expanding knot shows the older black knot and the expanding infection enlarging the knot. The expanding portion will release spores next spring.

Because the knots are easily visible and localized, removing infected twigs and knots from branches is an important part of disease control. This should be done during the winter dormant period when the knots are easily visible. Cuts should be made several inches (4 to 6 inches) below any visible signs of the knot. Cuts can also be made during the growing season if you see knots expanding, but make doubly sure you cut well past any swelling. Burn all infected knotted prunings before the trees break dormancy in the spring. Spores can develop and spread from knots left on the ground or in brush piles.

On large, main branches and trunks, knots should be cut out with a knife or chisel. At least 1 inch of healthy bark around the knot should be removed with these cuts. Taper the cuts to a point at upper and lower ends to promote regrowth of the bark over the wound. If possible, nearby wild plum and cherry trees showing black knots should be destroyed.

Commercial plum growers routinely spray and focus on removing black knots on infected twigs and branches in the winter. Fungicides are applied starting at green cluster and repeated at seven- to 10-day intervals until shoot growth ends around mid-June. Fungicides containing chlorothalonil (FRAC Group M5) are the standard treatment to control this disease. Chlorothalonil sprays are applied during the prebloom and bloom period and also control blossom brown rot. Chlorothalonil cannot be used after shuck split on exposed fruit if that fruit is going to be harvested for human consumption. Chlorothalonil can be used after bloom on ornamental trees where there is no fruit harvest. Fungicide choices for commercial fruit growers after shuck split include Indar (fenbuconazole, FRAC Group 3) and Topsin-M (thiophanate methyl, FRAC Group 1). Sulfur is not an effective control material for this disease. See Michigan State University Extension bulletin E0154, “Michigan Fruit Management Guide,” for any changes and current commercial recommendations.

Most people do not notice black knot on their trees until the knots become obvious, which is usually two to three years after the initial infection. All knots should be pruned out the winter you notice them on the tree. Remember that these infections are at least a year old and you will see another round of infection next year from infections that occurred the previous spring. Begin a spring spray program to reduce the spread of the disease. If you put off pruning and spraying, the tree will quickly be covered with knots and will need to be destroyed. Managing black knot in an orchard showing symptoms is at least a two-year project. 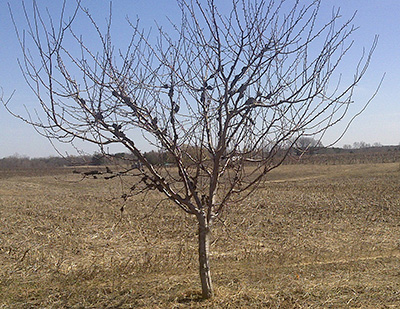 Stanley plum tree with many large black knots. Removing these knots would destroy the structure of the tree. Even with a spray program existing knots will continue to expand if they are not controlled.