County commissioners from across northern Lower Michigan learned about a cooperative timber bridge and stream bank restoration project and a dam removal project near Gaylord this fall. Lisha Ramsdell, Program Director for Huron Pines, led the tour and shared many details about the two projects.

The bridge project was on the Poquette Road crossing over the Sturgeon River. This effort began with a conversation between Huron Pines, the Otsego County Road Commission and Livingston Township, a conversation between people who had worked together on projects in the past and built a trusting working relationship. 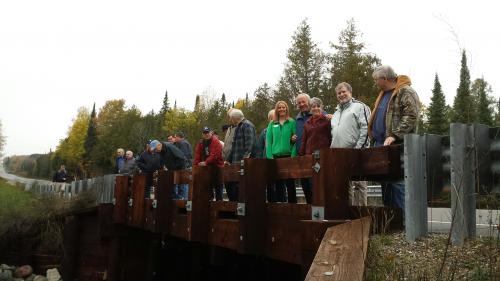 The road commission was planning to repave that stretch of Poquette Road. The 10-foot culvert was a pinch point in the river which increased the river velocity, eroding stream banks and making it difficult for fish to swim upstream to spawning grounds. It was obvious to all that the repaving project was the opportune time to make improvements to the stream crossing.

A design firm was identified, and in about six months’ time, funding partners were found and $175,000 was committed to the project. Construction took about six months more. The bridge is made of red fir, spans the width of the river and has a life expectancy of 20+ years.

The group then traveled to the Song of the Morning Ranch. This private club is the site of an old dam on the Pigeon River. The dam failed in 2008, and the subsequent rush of water and sediment killed about half a million fish. Following several years of legal battles, Huron Pines was asked to work with the parties to lead the dam removal and installation of the new bridge.

The water level in the impoundment has been lowered, and the removal of the rest of the dam is expected in 2015. The river is finding its own path, which curiously is not the same as the one it followed prior to construction of the dam. The reality of having a single owner of all the land around the former pond is allowing the study of a river finding its way rather than having legal battles to determine whose property will remain as waterfront, which is a unique opportunity to study that process. To learn more about this project please visit www.huronpines.org. 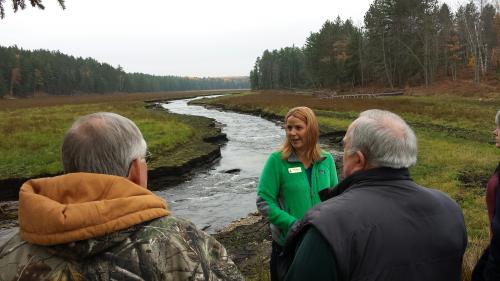 While the failure of the dam was a catastrophic event, and important in its own right, it is also indicative of another critical issue, that of aging infrastructure. Dams, bridges, roads, and structures of all types have limited life expectancy. All of the infrastructure we depend on in Michigan is aging. It is critical that governments and private owners, whether those owners are individuals or organizations, know the condition of their infrastructure and make plans for its repair and/or replacement.

Commissioners who participated in this tour are delegates from their counties to the Michigan Northern Counties Association (MNCA). Michigan State University Extension provides educational programming assistance to the MNCA, which meets eight times each year.