Core aeration and dethatching of lawns

Students are now back on campus, college football kicks off this weekend, I’ve actually started to see some fall leaf color already, and no doubt I’ll soon be seeing the signs advertising for core aerification of lawns on the street corner. Core aeration reduces soil compaction, creates channels in the soil for water infiltration and gas exchange and removes thatch. Core aeration is the removal of soil plugs that will leave your lawn looking like you have rabbit problems. Core aeration can be very beneficial for high clay content soils as it will help loosen up the soil to facilitate better drainage and rooting of the turf.

Whether you are hiring a contractor to core aerate your lawn or you are doing it yourself, I would make sure to know where everything is buried. If you have an in-ground irrigation system, invisible dog fence wire, or any other buried wires you’re worried about, I’d make sure to have them well-marked and make sure you don’t go too deep to create problems. Although core aeration will remove thatch, if you have a serious thatch problem it will not provide the quickest remedy. Many homeowners seem obsessed about managing thatch and making sure that their prized lawn does not accumulate too much of it. There was a time not too long ago when folks picked up clippings in order to avoid the risk of thatch accumulation. Returning clippings to the turf will not produce thatch unless your mowing interval is so long that the lawn looks like a recently cut hay field when you finish mowing. Thatch as defined by Dr. James B. Beard is “a tightly intermingled layer of dead and living stems and roots that develops between the zone of green vegetation and the soil surface.”

In the most basic sense, thatch is what gives the turf that “spongy” feeling when you walk on it. If you ever walk on a recently established turf area, you might notice that it feels very firm because a thatch layer has not developed yet. Just like beer, a little thatch is good but a lot can really cause a headache. A thin thatch layer of half an inch or less on lawns is normal and helps insulate the growing point of the plant, lower soil temperatures and retain moisture. However, when the thatch layer starts to accumulate to greater than a half inch, and especially if it gets to be over an inch in depth, then it’s time to get off the sofa and take action. Excessive thatch accumulation can result in decreased rooting, increased potential of scalping, and possibly increased insect and disease occurrence.

Although core aeration can be used to remove thatch, dethatching will remove more thatch in one operation. Dethatching is the removal of thatch that has accumulated in the turf and is a very aggressive procedure that will leave piles of debris on the lawn that will then need to be raked and removed – a procedure not for the faint of heart. Dethatching equipment goes by many names including but not limited to: power rake, dethatcher and lawn comber. The best time of the year to do aerating or dethatching is in the fall as generally the turfgrass is not under stress this time of year and will have favorable growing conditions for recovery. 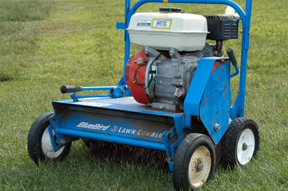 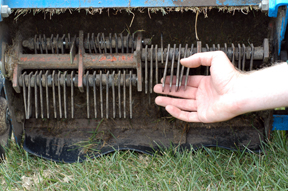 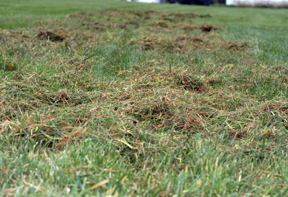